Mookie Betts, Giancarlo Stanton and A.J. Pollock are among those on our lists.

Who were the overachievers and underachievers of the 2018 MLB season?

It’s a question to consider for those evaluating their teams and conducting their fantasy drafts. Though there are no guarantees that the numbers will even out and that the player will return to his expected norms, understanding who overachieved and underachieved provides context to a player’s past performance.

Our defense-independent batting statistics (DIBS) can give expected results on every ball in play for a hitter by comparing the ball’s trajectory, direction and velocity to other similar batted balls and assigning value based on those results. We can then compare those to his actual offensive numbers to determine if a player underachieved or overachieved.

In other words, these numbers can tell us if a player may have hit into hard luck, played in an unfriendly ballpark, or been the victim of some good defense. Or perhaps he hit into good luck, got a few ballpark-friendly hits, or took advantage of some poor defense.

Here’s a look back at several players from 2018, along with their projections for 2019.

Before the start of last season, Mookie Betts made the underachiever list. He was coming off a 2017 in which he hit .264/.344/.459 when the batted-ball profile was that of a .297 batting average and .886 OPS hitter. It was noted then “There’s not much reason for concern, and at 25 he should be an MVP-caliber player.”

Much that went against Betts in 2017 turned in his favor in 2018. He won AL MVP honors in 2018, though the data indicated his numbers were better than what they likely should have been.

Betts was joined by J.D. Martinez and Steve Pearce in having the biggest positive differential between expected OPS and actual OPS. Martinez’s OPS was boosted by hitting 43 home runs, 10 more than the data indicated he was expected to hit.

The player with the highest OPS above expectations who wasn’t on the Red Sox was Carlos Gonzalez, who hit .276 with a .796 OPS last season. Gonzalez’s batting average and OPS were 41 and 105 points above his expected performance respectively. Gonzalez was likely helped by Coors Field, where he hit .315 with a .941 OPS compared to .241 and .663 on the road. He’ll move to less-friendly Progressive Field as a member of the Indians in 2019.

Angels shortstop Zack Cozart hit .219 with a .658 OPS while dealing with injuries in 2018, not what the team had in mind when it signed him to a three-year deal last offseason. Cozart’s numbers were a bit out of whack given where he hit the ball and how hard he hit the ball.

Dodgers center fielder A.J. Pollock is another player whose numbers should have looked a little better. His .800 OPS in 2018 was 106 points below what was expected from his batted balls. Pollock, who finished his tenure with the Diamondbacks in 2018, may have been hurt by Chase Field’s humidor, as the ballpark was not the hitter-friendly place for right-handed batters that it had been in the past. It will be interesting to see how Pollock performs with his new team, the Dodgers, in 2019. His projected OPS (noted below) is right in line with his 2018 OPS.

One of the top prospects last season was Marlins center fielder Lewis Brinson, who hit a disappointing .199 with a .577 OPS in just over 400 plate appearances. Brinson should have been something closer to an average player in 2018 as his batted balls merited more home runs (15 expected, 11 hit) and a higher BABIP (.322 expected, .257 overall).

Brinson’s expected batting average and OPS for 2018 were .242 and .697. He got off to a hot start this spring and it will be worth watching to note if there is any carryover into his 2019 season. 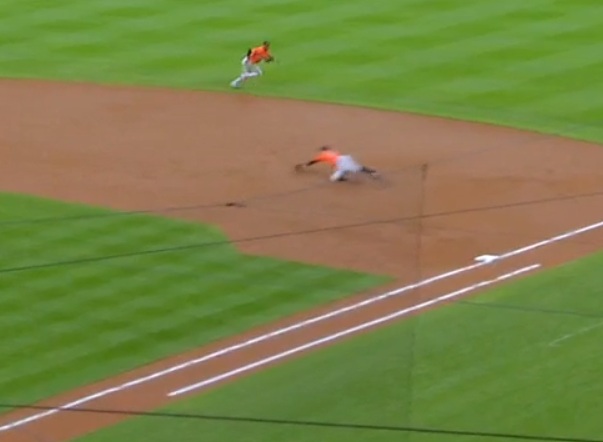