There has been about as much usage of the 4-man outfield in the first month of 2019 as there was in all of 2018. We take a closer look.

Sports Info Solutions began tracking the four-man outfield shift in 2018, but the result was only 37 balls in play against it for the season. It gained some attention in Spring Training this year, and Andrew Kyne wrote about candidates for the unusual defensive approach. Now the 2019 MLB season is more than a month old, so let’s look at the status of the four-an outfield so far.

Batters have already put a ball in play against a four-man outfield 34 times this season despite it being used by only three teams, down from five last year. The Minnesota Twins, who led MLB with 27 four-man outfield uses in 2018, have yet to show it against a ball in play this season. The Cincinnati Reds, on the other hand, have gone from using it zero times in 2018 to leading the majors with 22 usages versus balls in play this season.

What’s most interesting between these two teams is the difference in their overall shift tendencies. The Twins were among the league leaders in defensive shifts used in 2018 with 1,723, presumably making them more willing to experiment with different alignments. Three of the top four teams to use the four-man outfield last year ranked first, third, and fourth in total defensive shifts.

The Reds, however, don’t follow this pattern. They ranked 18th in defensive shifts with 1075 in 2018. This year, they are on pace to increase shift usage by only about nine percent and rank 19th among teams. It doesn’t appear that this more aggressive approach from the Reds has influenced a major increase in overall shift usage.

The Tampa Bay Rays (11) and San Francisco Giants (1) are the other teams to deploy the four-man outfield this season. The Rays are the only team to use the shift in both 2018 and 2019, showing it twice last season. Like the Reds, an increase in four-man outfield usage has not correlated with a more aggressive overall shift increase for the Rays. They are on pace for about 300 fewer defensive shifts after leading MLB in 2018.

The four-man outfield has become more common in the first month of the 2019 season, but how is it fairing against batters? It’s difficult to assess something that is still used so infrequently and by so few teams, but let’s look at the numbers anyway. Last year, batters posted a batting average on balls in play (BABIP) of just .189, well below the league average of .296. This season, batters have had much greater success, posting a BABIP of .441, well above the league average of .293.

Of course, there are many factors that determine the result of a ball in play. Perhaps the best way to assess the four-man outfield shift is to watch every ball in play against it. Luckily, that’s easy to do when it’s only happened 34 times. Here are some of the balls in play that I found to be most notably affected, all against the Reds:

The four-man outfield allows the defense to cover more open space in the outfield. With an extra player, the defense can position itself closer to both the left field and right field line without sacrificing open space in the middle of the field. That doesn’t just increase the chance of turning fly balls and line drives into outs, but also holding runners to fewer bases on any ball hit into the outfield. The Reds have taken advantage.

Yasmani Grandal, Freddie Freeman, and Matt Carpenter have all placed line drives down the right field line against the Reds this season. All three resulted in a single for the batter. The well positioned right fielder (second baseman against Freeman) was able to cut the ball off and keep the batter out of scoring position. A win for the defense.

The result isn’t always so favorable. When a team uses the four-man outfield it must decide where to leave a gap in the infield. This isn’t always a problem as the batter is usually a heavy pull hitter and would attract a full Ted Williams shift (three infielders to the pull side of second base) in a typical situation.

This is true of Max Muncy of the Dodgers. He has pulled over 90 percent of ground balls and short line drives to the right of second base this season and has seen 149 full Ted shifts on balls in play since the beginning of 2018, including seven by the Reds.

However, when the Reds elected to play four outfielders against him on April 16 with a runner on base, they were forced to keep their third baseman within a reasonable distance of third base and only two infielders on the pull side. A ground ball up the middle went for a single where the shortstop likely would have been playing with a full Ted Williams shift. A win for the offense.

Any team that elects to use defensive shifts of any kind is going to see both positive and negative consequences. But with a more unusual shift like the four-man outfield, there are new consequences that teams must consider before positioning its players.

It will be interesting to see if the Reds keep up this pace for the remainder of the season, and if any other teams will begin to experiment with the four-man outfield. As I mentioned earlier, the Twins haven’t deployed the shift after leading MLB last season. However, players they used it on last season have had only 15 at-bats against them this season, so maybe they just haven’t found it necessary yet.

With nearly five months remaining in the 2019 MLB season, we’ll just have to wait and see. 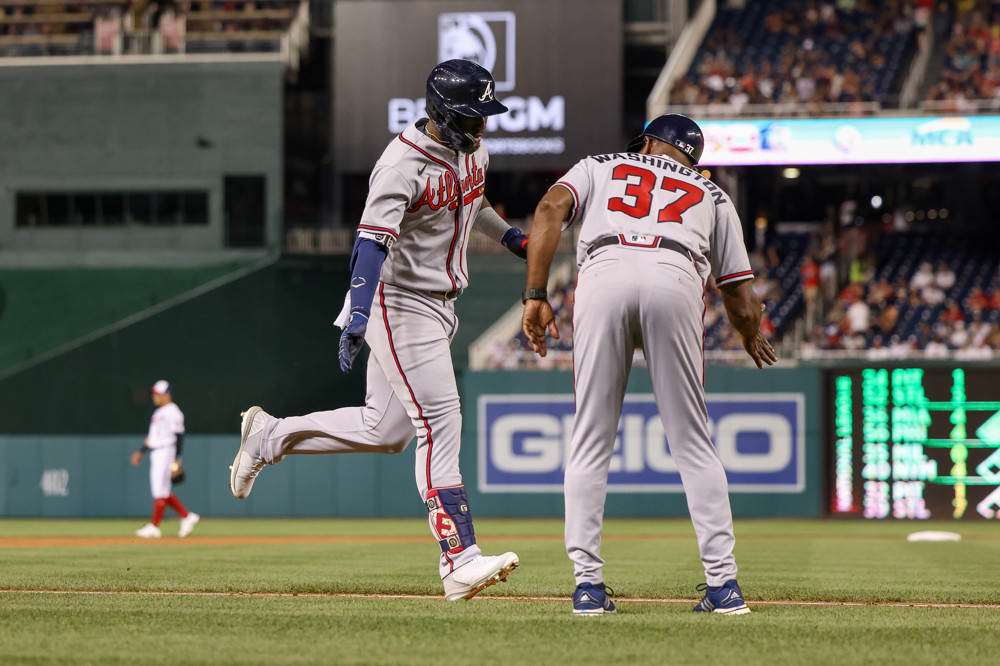