Looking more closely at those who've had to wait the longest to go yard.

This year, baseballs have been flying over fences at a record pace, with 4,215 home runs entering Thursday’s games, 29 more than there were for the entire 2014 season.

There are 556 non-pitchers who have taken at least one trip to the plate in 2019; 456 of them have at least one long ball. The math there says that 100 guys haven’t gotten the memo about the ball being “juiced”, though some of them have gotten very few plate appearances. Some of them, though, have gotten hundreds. Here’s who’s gone the longest without taking a trot around the bases.

A wholly unsurprising name to lead the list, Hamilton has yet to hit a home run in Royals blue, and it might stay that way with the trade deadline just six days away and teams likely coveting his glove, arm and speed. He’s never been much of a hitter (.624 career OPS, .553 this season), but his previous career-low in home runs is three, and his OPS is 10 points lower than his previous career low.

The closest he’s come to a homer since taking Freddy Peralta deep to lead off the Reds’ turn at bat last August was this double last month, which hit the warning track on a fly but wasn’t hit all that hard (97 mph exit velocity).

Another fun Hamilton fact: despite his speed, he’s never hit an inside-the-park home run at the MLB level, but he does have a walk-off home run… against Josh Hader, no less!

Injuries to his hamstring and back kept Duffy out of MLB action for 2019 until Tuesday, which is why he has only roughly a half-season’s worth of plate appearances in a thirteen-month span. Duffy’s still been pretty good since his last homer, though, with a .282 batting average and a 24% hard-hit rate. He came agonizingly close in his first game off the IL, stroking a double off of Chris Sale. Unfortunately for him, it was hit to the deepest part of the ballpark.

Unfortunately for the Rays, they’ve got two infielders on this list, and unlike Duffy, Wendle has not gotten good results recently. In games since the one in which he hit his last homer, he’s hitting a respectable .266 with a 28% hard-hit rate, but this season those figures are down to .209 and 22%. He might’ve come even closer to a homer than Duffy, roping a belt-high changeup to the warning track in Baltimore just a couple weeks ago, at nearly 100 MPH off the bat.

Jay, like Hamilton, has seen his drought span multiple teams, spending the latter half-or-so of 2018 with the Diamondbacks before signing with the White Sox in the offseason. And like Duffy, he was limited by injury. A hip injury that turned into a groin injury that led to some knee and back ailments pushed Jay’s Sox debut back to June 24, and despite his lack of power output, he’s produced a .743 OPS in 89 plate appearances, thanks to a .317 batting average. Jay’s performed eerily similarly to Wendle since his last longball, with a .270 average and a 28% hard-hit rate.

Jay’s had a couple of close calls: he hit a 410-foot double high off the center field wall in Kansas City just last week, and a long flyout a few weeks prior, necessitating a leaping grab from Max Kepler.

Hey, someone who’s actually got a home run this year! Panik’s had a season to forget; his OPS was .700 following that game on May 28th, but since then it’s just .548, dropping his season OPS to a well-below-average .626. There are positives in that time, though: his K-BB ratio is an excellent 16-to-14, and his hard-hit rate is north of 30%.

Panik’s come closer than anyone in the top five to ending his drought, crushing a middle-middle fastball for a triple, 101 MPH off the bat, on June 26th. Unfortunately, it came to the deepest part of Oracle Park, high off the archways near Triples Alley. His next homer will have to wait. 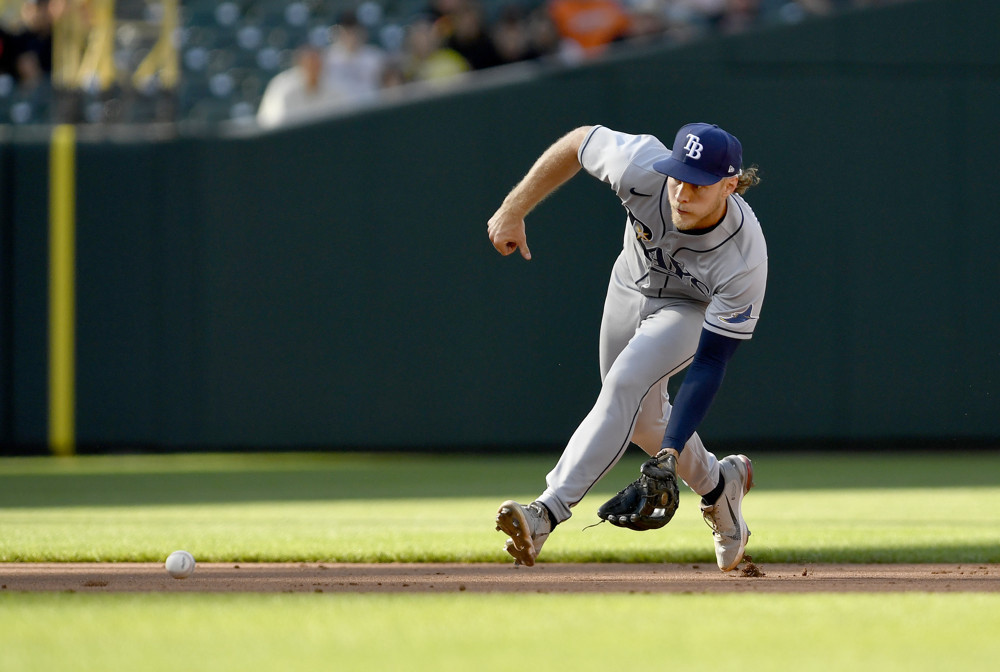 Taylor Made: Walls Is Among Best Defensive SS in MLB