Looking at guys like Kohei Arihara and Masataka Yoshida who could be posted in future years.

At SIS, part of our baseball operation involves collecting data on all of the Nippon Professional Baseball (NPB) games. We’ll be sharing detailed profiles on a player from each of these teams. This piece, the last in our series, focuses on players who could be posted in future years.

Kohei Arihara has long been on the radar of Pacific Rim scouts, due in no small part to his rotation mate Shohei Ohtani drawing massive interest during his first three seasons as a pro. Nevertheless, Arihara has maintained the interest of MLB scouts well after the departure of Ohtani. The 27 year old right hander has ascended to ace status for the Fighters, and has enjoyed a breakout season on the strength of increased changeup usage that allows him to fare much better against left handed hitters. His 25.2 K% and 2.46 ERA this season are by far career highs, and it was encouraging to see him get to 160 innings pitched after a shoulder injury prior to the 2018 season limited him to 110 innings.

Arihara features a four seamer with decent run and rise as his primary fastball, which will range anywhere from 88 to 95 MPH in a given start. It’s hard to get a great gauge of where he sits with, but his ability to maintain most of the higher range of his velocity late into games suggests he likes to mix speeds rather than try to blow hitters away.

Against right handed hitters, Arihara goes to his slider and splitter to finish off plate appearances. The slider is his primary breaking ball, and an above-average offering with nice bite that is commanded well gloveside to the black. The splitter features good slashing movement that can get down and in on the shoetops of righties, but it can leak over the plate at times and projects more as an average offering.

Against left handed batters, Arihara likes to go to his changeup and cutter. The cutter, which has been used less in recent years, is an average offering that Arihara can locate fairly well on the hands of lefties and generate weak contact. The changeup is the one true plus offering that Arihara features, as he demonstrates plus depth and fade with more consistent feel than the splitter. Rounding out his repertoire is a mid to high 80s two seamer that will likely be scrapped at the next level, along with an eephus curve that serves as a change of pace pitch.

With only being a year away from that all too valuable sixth year of NPB service time, don’t expect Kohei Arihara to be posted until after the 2020 season. He has grown into his wide arsenal of offerings, and seems to have found a pitch mix that best suits him as a starter. Arihara demonstrates strong command of his three best pitches–an above average four seamer, a plus change, and a slider that flashes plus. That, along with his resourceful deployment of his lesser secondary offerings to keep hitters off balance, projects Arihara as a middle of the rotation starter for an MLB team as soon as 2021.

The shining star in an otherwise bleak Orix sky, Masataka Yoshida is one of the best pure hitters in the NPB. He’s had back to back 25-home run seasons, is one of three qualified hitters to walk more than he struck out in 2019, and has been consistently among the leaders in OPS throughout his NPB career. The only thing Yoshida doesn’t do is run–he’s 9 for 14 in career stolen base attempts–but there are few better inside the batter’s box than this Buffaloes’ basher.

Yoshida exhibits plus bat speed and plus raw power from the left side, with quiet lower half swing mechanics. His load gets a little long due to a hand hitch keeps him from getting out in front of the ball more on high velocity pitches, but he still has the hand quickness and feel for hitting to spray consistently and drive those pitches up the middle. Being able to get out in front and drive those balls pull side with some regularity is the next step. Defensively, Yoshida is limited to left field, as he has fringe average arm strength and foot speed. He moves very tentatively in the field and doesn’t seem to get good reads on fly balls, which projects him to have below average range.

Yoshida’s power relative to his size, feel for hitting from the left side, and fringy defensive ability reminds me a lot of Texas Rangers’ DH/LF Willie Calhoun–whose offensive breakout in 2019 shows promise for Yoshida getting an offer to play everyday as a middle of the order masher. Due to a lower back injury that sidelined him for most of 2017, Yoshida is likely not going to gain the requisite six years of service time required to eligible for a major league contract in the posting process until after the 2022 season. Considering his value is almost entirely tied to his bat, he should be able to retain his value over the next three seasons provided he stays healthy–though it remains to be seen if Orix will be willing to post their superstar.

NOTE: Due to Taneichi’s age, I’ve decided to take a more pure scouting report approach to his entry in the series. We’ll cover his frame, mechanics, each pitch and his overall command, along with overall thoughts and a long term projection.

Build and Mechanics: 6’0”, 183 lbs. Mostly filled out, might be able to add a bit more muscle to his frame. Pitches out of a three-quarter armslot, shows good arm speed and extension with smooth lower-half mechanics; though shortening up his arm action might help him get a bit more zip on his fastball.

Fastball: Sits 88-91, Tops out at 92. Could probably add some muscle onto his frame, but the velo is going to be no better than average. Can get plus run on it and has shown effectiveness getting weak contact working up in the zone. Gets good rise on his 4-seamer and good sink on 2-seamer.

Slider: Average pitch that flashes above average bite and depth. Think it should be used more as a change of pace against lefties but should be an out pitch against righties as he refines his command of it.

Splitter: Plus depth and fade, shows advanced feel but can leak it over the middle. Demonstrates an ability to tunnel it off of sinker against lefties and slice it down against righties.

Command: Secondary command is developing, showing some difficulty getting over the top of his slider. Both split and slider will miss over the plate, but motion is repeatable and fluid enough to project an increase in hitting spots.

Overall: Taniechi has been impressive as a second year out of high school in the NPB. His upside is limited due to a fastball with a strong movement profile but lackluster velocity, but he has a splitter that projects as plus along with a slider that should be a reliable out pitch versus righties. Secondary command is still a work in progress, but he generally keeps his fastball out of the middle of the zone. Refinement of his slider will be key for him. If he can consistently get over the top of it he has bottom of rotation upside in an MLB rotation. 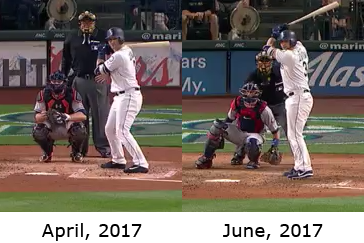