In the article, “Evaluating NFL Defenses using Expected Points,” the notion of Expected Points Added per Drive (EPA/D)  is explained, demonstrating how assessing the difference between starting Expected Points (EP) and ending EP on a particular drive can measure a team’s defensive success. If you have not read this article, it is highly recommended to understand the principles discussed in this article, and can be found here.

Once one understands how to evaluate defensive performance based on Expected Points Added per Drive, it is easy to apply this concept conversely to create an offensive measurement. Like its defensive counterpart, the offensive metric is derived from taking the ending EP and subtracting the starting EP. The only difference here is that the higher the measurement, the better the offense. Offensive EPA/D measures how many Expected Points an offense added per drive, on average, over the course of the 2018 NFL season.

The table below ranks NFL offenses for the 2018 season based on EPA/D and juxtaposes this ranking with three traditional metrics for measuring offensive success: yards per game, points per game, and turnovers.

One team that stands out in these rankings is the Tampa Bay Buccaneers. In terms of yards per game, the Bucs had a prolific offense, third best in the NFL. However, they struggled to put as many points on the board as they should have because of their plethora of turnovers.

Tampa Bay turned the ball over a league-worst 35 times over the course of the regular season, just under one turnover every five drives. That abysmal turnover rate was largely due to the highly volatile play of quarterback Ryan Fitzpatrick and the NFL’s turnover leader since 2017, Jameis Winston (tied with Kirk Cousins and Derek Carr). Despite this terrible turnover rate, the Bucs still ranked No. 9 in offensive EPA/D. It will be interesting to see if this offense can reduce its mistakes and reach greater heights under new head coach Bruce Arians.

The NFL average amount of offensive drives across the 2018 season was approximately 179, while Atlanta only had 168. Adding their 1.0 average starting expected points to their .94 offensive EPA/D and multiplying the result by these 11 missed drives, the Falcons missed out on more than 21 points on the season by not having these opportunities. This poor starting field position and low number of drives is mostly due to Atlanta’s subpar, injury-riddled defense. Using the defensive EPA/D ranking, its defense was the second worst in the NFL.

A variety of factors contribute to a team’s offensive success, from the performance of the quarterback to the ability of individual linemen, but the effect of field position cannot be understated. Using offensive EPA/D distinguishes truly elite offenses from those who have unproportionally benefitted from the field position provided by their defense and special teams. Offensive EPA/D also accentuates the importance of avoiding turnovers and paints a better picture of offensive performance as a whole. 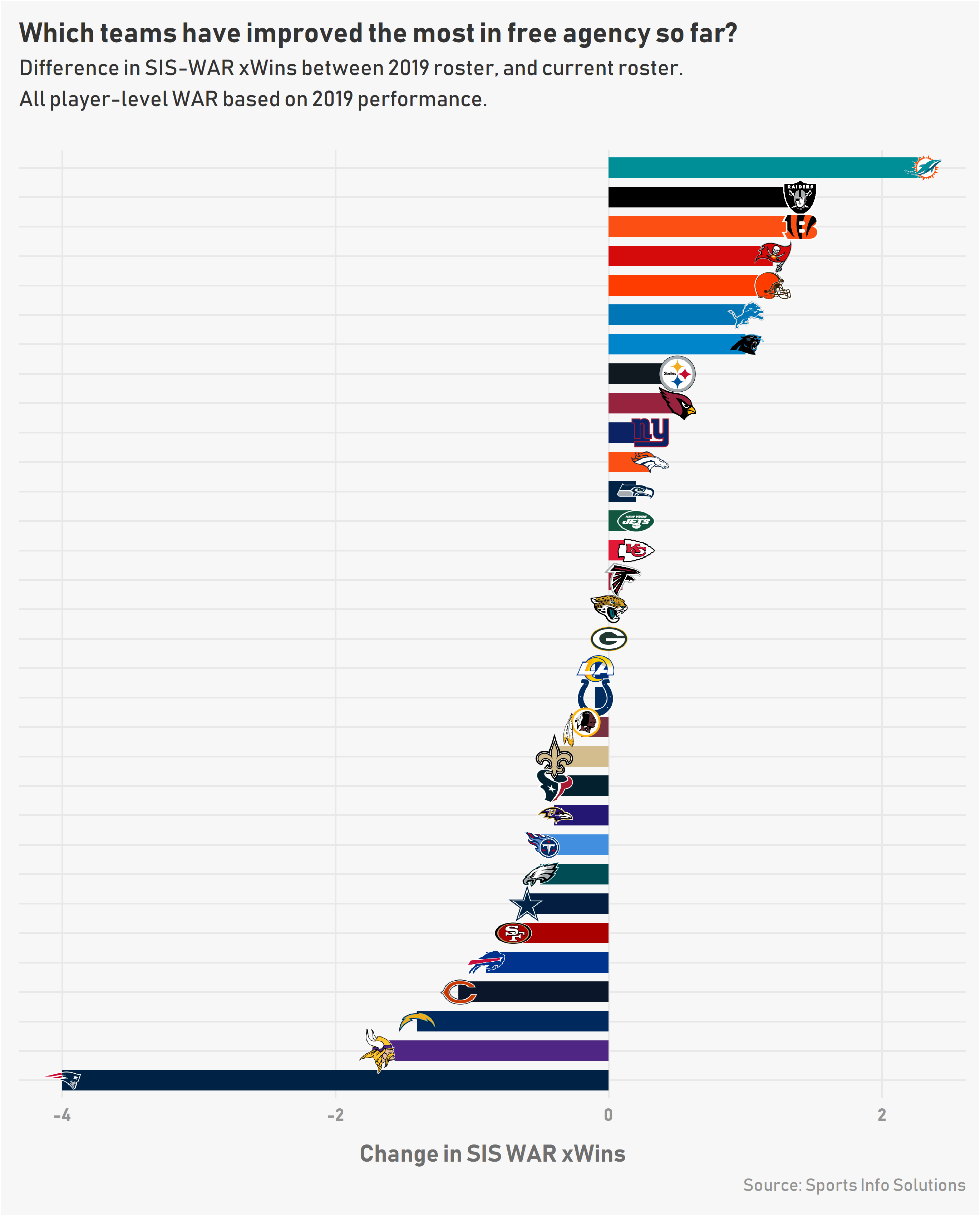 The Winners and Losers of the NFL Offseason… So Far