Versatile defenders are widely coveted. We look at Joseph Ossai, Antjuan Simmons and a few others.

Year-in and year-out, there is buzz about versatile college players leading up to the NFL draft. Coming out of college, names like Tyrann Mathieu, Jabrill Peppers, Derwin James, and most recently Isaiah Simmons were heralded as utility players that defensive coordinators would have the luxury of lining up anywhere across the field. This versatility is highly valued and often leads to a high draft selection for players who display position flexibility at the college level, as seen by the names mentioned above.

While there is uncertainty heading into the 2020 season, with several conferences already eliminating out-of-conference matchups, it is still worthwhile to take a look at some players who may end up being the best all-around defender heading into next year’s draft.

The table below shows the top five returning NCAA defenders in terms of Total Points Saved on defensive snaps who made an impact at all three levels of the defense in 2019. Each recorded at least 100 snaps aligned at defensive back, off-ball linebacker, and defensive line (which includes standing edge rushers). Each player is listed with their upcoming school year and relevant 2019 statistics.

The lengthy 6’4” 255 lbs Ossai was a force on the Longhorns’ defense last season, ranking fifth in Total Points Saved among all linebackers in the NCAA (second among returning linebackers). Aside from quarterback Sam Ehlinger, who ranked eighth in Total Points among all NCAA players, Ossai was the most valuable player on the team in terms of the statistic. While mostly lining up as an off-ball linebacker, more than one-third of his snaps came on the defensive line – primarily as a standing edge rusher. When outside of the box, Ossai exclusively lined up as a slot defender.

Ossai led the Texas defense with 90 tackles on the season and 14.5 tackles for loss. He was extremely productive against the pass, ranking eighth among linebackers in Pass Defense Total Points Saved. While rushing on 46% of passes, Ossai was able to generate pressure on 20% of pass rushes and sack the quarterback four times. He also recorded two interceptions while in pass coverage. With a similar showing this season, Ossai may end up foregoing his senior year and declaring for the 2021 draft.

Simmons’ performance in 2019 placed him 15th among all linebackers in terms of Total Points Saved (second among returning Big 10 linebackers). He led the Spartans’ defense in Total Points and finished second among all players on the team, behind quarterback Brian Lewerke. Simmons spent almost as much time outside of the box as a slot defender as he did in the box as an off-ball linebacker. Occasionally, he lined up as a standing edge rusher with 101 of his snaps coming from the position.

Simmons led the Michigan State defense in tackles with 88 on the season, 15.5 of which were tackles for loss. He was effective against both the run and pass, ranking 25th and 22nd at linebacker in Total Points Saved versus each, respectively. While mainly utilized in coverage against the pass-ranking 22nd at the position in Pass Coverage Total Points Saved and allowing a completion percentage of only 46% when targeted-Simmons was also efficient when rushing the passer, generating 3.5 sacks while only rushing 19% of the time. Entering his senior year, Simmons will be an intriguing prospect to watch this season who will likely end up hearing his name called in the 2021 draft.

A key player in LSU’s perfect 2019 season, Stevens finished as the 21st ranked safety in terms of Total Points Saved (second among returning SEC safeties). A versatile full-time starter on a defense loaded with NFL talent, Stevens lined up mainly at defensive back, evenly splitting time as a deep safety and slot defender. When in the slot, he rarely lined up in press coverage – only 17 out of 325 snaps. When in the box, Stevens lined up as either an off-ball linebacker or as a standing edge rusher.

Stevens was very active in 2019, contributing 93 tackles (second on team) and 9.5 tackles for loss. He had similar production against the run and pass, ranking 30th and 38th among safeties in Total Points Saved versus each, respectively. In coverage, Stevens broke up nine passes on 31 targets, three of which were interceptions. He shows a particular knack for rushing the passer, generating pressure rates of 26% and 43% in each of the last two seasons along with sack rates of 8% and 10%. If Stevens is able to continue his high level of production for the Tigers’ defense in his senior season, he will command a high selection in the 2021 draft.

In his first season as a starter, Owusu-Koramoah was runner-up for Total Points Saved on Notre Dame’s defense (first among returning defensive players). He played the majority of his snaps as a slot defender. When not in the slot, just over a quarter of his snaps came as an off-ball linebacker and nearly 20% came as a standing edge rusher.

Owusu-Koramoah finished the season with 76 tackles, 13.5 tackles for loss, and three forced fumbles. His versatility is seen against the pass. Despite mainly being a coverage player, Owusu-Koramoah was able to generate pressure on 27% of his rushes and finished with 5.5 sacks. Another year as a starter with similar or better production will surely boost his stock for the 2021 draft.

The highest rated returning three level defender in terms of Total Points Saved from Group of Five schools, Davis led the Mean Green defense in the statistic last year. The majority of his snaps came as an off-ball linebacker, followed by over a quarter of snaps as a standing edge rusher and 107 snaps as a slot defender.

The All-Conference USA Honorable Mention recorded 79 tackles with a team-leading 14.5 tackles for loss. From a Total Points perspective, Davis is stronger against the run than against the pass on a per-snap basis. However, his skills against the pass are not to be overlooked, as he generated pressure on 27% of pass rushes, generating 4.5 sacks. While impressive statistically, seeing Davis play on Sundays may be a long shot given his size- 5’10” 209 lbs. His best chance may be to improve upon his pass coverage skills and transition to more of a defensive back role. 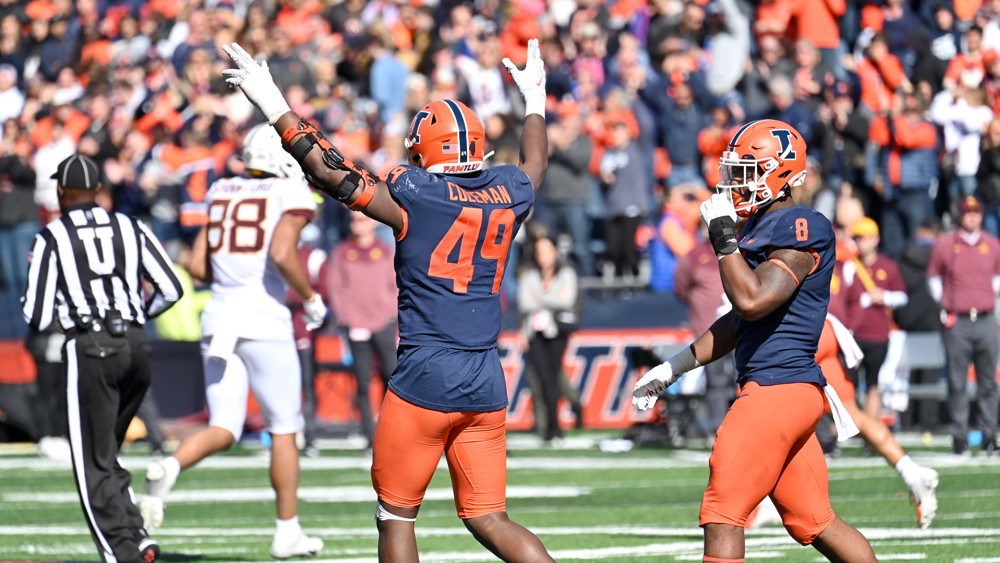 How Illinois’ Simple Schematics Have Maximized Its Talent