Jordan Strachan has gone from walk-on status to being a potential high-impact player in the SEC this season.

Well informed fans understand that college football players jumping from lower-level programs to Power 5 schools are potential gems. These players are often a safer bet than an incoming freshman, even if that freshman is beloved by all of the recruiting services. Players that have a proven track record of success and fit all of the required measurables are often impact players for their new program. When these players play positions that are coveted at the next level, NFL fans should take notice as well.

Last year’s example of this was Jabril Cox, who played linebacker for North Dakota State, then transferred to LSU. He proved he had the athleticism to hang with blue-chip prospects and proved to the NFL that he was a modern-day linebacker.

This year, one top candidate to do something similar is South Carolina’s Jordan Strachan.

Strachan is a prime contender to vault onto the national radar, as well as the early rounds of the NFL draft. Strachan is an edge rusher that plays off the ball occasionally and fits the bill for the next level at 6’4” 220 with long arms and impressive athleticism. After spending the last three seasons with Georgia State, Strachan has decided to transfer to play for the Gamecocks. The jump from C-USA to SEC competition is vast, but Strachan is used to putting in the work and earning his spot.

Strachan began his career as a walk-on at Georgia State, hoping to make the team as a safety. He was considered a 2-star recruit by 247Sports and received minimal interest from high-level college football programs. After redshirting his first year with the Panthers, Strachan converted to linebacker and continued to add weight. Another setback occurred in 2019 when he suffered a season-ending knee injury in the first game of the season. Strachan continued to work and had a breakout year in 2020, tying for the FBS lead in sacks with 10.5.

In addition to leading the country in sacks, Strachan put up other impressive numbers. He had 36 total pressures when rushing the passer, which was tied for 23rd in the country. He also had 3 forced fumbles when rushing the passer, tied for the most in the country. These numbers show that Strachan is consistently a menace to the quarterback and he is looking to take the ball away. With strip sacks becoming more of an emphasis among NFL defensive coaches, Strachan is a long-armed bandit that will be coveted.

On top of the traditional counting stats, Strachan produced well from an analytical standpoint. In 2020, he accumulated 43 Total Points (Total Points is an SIS metric that looks at the Expected Points Added on each play and attributes individual players for how much they contributed to that value), while creating 1.5 Total Points per 20 snaps. These numbers ranked 10th and 33rd among all linebackers respectively. Strachan also performed well in Points Saved, with 28 and Points Above Average, with 20, ranking third in the country with both numbers. These are both metrics used by SIS to give statistical value to an individual player’s impact on the Expected Points Added on each play.

On top of being a game wrecker as a pass rusher, Strachan performed admirably against the run and his metrics compare well to players drafted highly in the 2021 NFL Draft. In 2020, against run plays, Strachan gained 12 Points Saved with 1 Point Saved per 20 snaps.

Azeez Ojulari put up 8 with 1.2 per 20 snaps. Strachan posted an average tackle depth of 0 yards, meaning when he made the tackle, the offense gained a total of 0 yards. That is slightly better than the 0.6 average tackle depth of first round pick Jaelan Phillips. Strachan was also a sure tackler and had a broken or missed tackle on 10.6% of his tackle attempts. This is similar to the 9.6% of third-round pick Chazz Surrat.

Strachan has all of the tools to be a highly sought after player at the next level. He still has two years of eligibility, but could forgo his final year if he remains productive against SEC competition.

Strachan displays an explosive first step and bends well when rushing the passer. His technique is raw and he has to learn to take advantage of his length, but this will only be his third full season playing as an edge rusher. He has the requisite size, athleticism, and motor with a knack for finding the ball. He has all of the tools to be a defensive coordinator’s dream and quarterback’s nightmare. 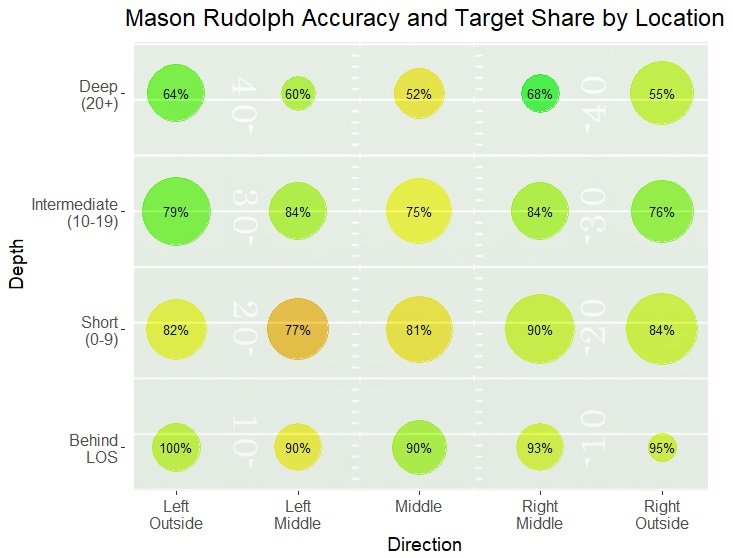