Aaron Rodgers is No. 1. But by the slimmest of margins. Check out the rest of our rankings and methodology here.

In judging who The World’s No. 1 Quarterback is entering 2021, we turn to our trusted Points Above Average, the key to our Total Points player valuation stat.

And it tells us that at this moment, the answer is Aaron Rodgers.

But that comes with a caveat. On a per-60 snaps basis (approximately one game’s worth), the difference between Rodgers and Patrick Mahomes is 12-thousandths of a point.

The World’s No. 1 Quarterback Ranking uses our player value stat Total Points to make a cumulative evaluation of game performance over a three-year period. The key to our calculation is PAA, which as we previously noted is the statistical underpinning of Total Points that is centered at zero so that positive numbers are above average and negative numbers are below average.

The current Top 8 are

There is a more sizable gap between Mahomes and Tom Brady, who checks in with the No. 3 ranking. Brady is about 1 PAA per 60 plays behind both.

Deshaun Watson ranks No. 4 after leading all quarterbacks in Total Points in 2020 (largely because Mahomes only played 15 games). He’ll drop given that he isn’t likely to be playing any time soon with the looming lawsuits against him.

Russell Wilson is at No. 5 and thus the de facto No. 4 given Watson’s absence, and here’s where there’s a significant line of separation. Wilson is a little more than 2 PAA per 60 behind Brady. He’s not close to catching any of the top three but he’s susceptible to getting caught.

Josh Allen holds the No. 6 spot in the rankings, an 18-place jump from where he ranked at the start of last season. Similar to Watson, Allen’s success running, combined with his passing improvements, lifted him up the rankings. Allen is within reach of Wilson but would need a considerable amount of consistency and excellence to get within reach of Brady.

The quarterback whose presence most often puzzles those who follow this stat, Derek Carr, ranks No. 7. For whatever you might think about Carr, he’s done right by our stats. He had the 5th-most Total Points for a quarterback in 2019 and the 10th-most in 2020.

One thing that Carr’s rank is a product of is third-down performance, which are especially valuable for stats based on Expected Points Added. He had the fourth-most Passing Points Earned among quarterbacks on third down in 2020 after leading the NFL in that stat in 2019.

Ryan Tannehill ranks No. 8 after an excellent 2020. Like Allen, he vaulted the rankings, jumping 15 spots from where he stood at the start of 2020. The Titans are hoping for such production in 2021.

The obvious QB to watch outside the Top 8 is Lamar Jackson, who ranks No. 13. Jackson slipped to from No. 6 at the start of the season to No. 18 through Week 9 after a rocky start. But seven straight games with a positive PAA moved him as high as No. 8 before he slipped a bit in his playoff starts.

Second-year man Justin Herbert stood at No. 20 after getting drubbed by the Patriots in Week 13, but consecutive strong showings against the Falcons, Raiders, Broncos, and Chiefs (8 TD, 1 Int) led him to the No. 10 ranking, ahead of seasoned vets like Matt Ryan (No. 11) and Matthew Stafford (No. 15), not to mention fellow 2020 rookies Joe Burrow (No. 24) and Tua Tagovailoa (No. 52).

No. 14, Baker Mayfield, now with three seasons under his belt, may be poised to ascend into the upper echelon. Mayfield was ranked No. 27 through Week 11 but then ran off seven games with a positive PAA in his last eight games of the season. That included three straight big games against the Titans, Ravens, and Giants in Weeks 13-15 (8 TD, 1 Int).

As for quarterbacks trending in the other direction, No. 33 Jared Goff is one to keep an eye on. Goff ranked as high as No. 8 last season after a good game against Washington. He sunk five spots the next week in a loss to the 49ers. After a career-worst -29 PAA against the Dolphins, Goff stood at No. 23 and kept dipping as the season continued.

Goff will get a fresh start with the Lions, as will Stafford with the Rams. We’ll be keeping an eye on how their season’s progress.

The full rankings are below:

Who have been the best pass defenders in 2018?

Which Defensive Playcallers Are Best At Coaching For Takeaways? 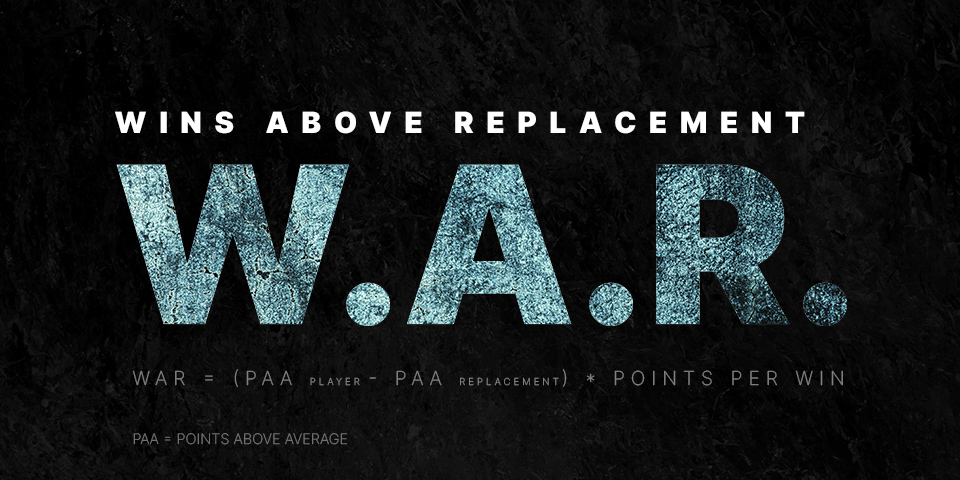 A Primer for SIS’s NFL Wins Above Replacement (WAR) Metric