Two seasons ago, Brandon Crawford was next-to-last among SS in Defensive Runs Saved. So what changed?

Giants shortstop Brandon Crawford won his fourth career Gold Glove Award last week and while he might not have had the best defensive statline among the NL finalists, we’ll say that it was a deserved honor.

Crawford had a great season at the plate and a very good one in the field for a division-winning team. He’s going to finish strongly in the MVP voting on Thursday.

I was on the conference call that Crawford did with the media the night he won and I was amused because there was a Michael Jordan touch of “And I took that personally” to some of his comments.

Crawford first said that winning this Gold Glove felt better than his previous three, saying that he was “kind of being told by everyone basically that my defense is falling off, that I’m not the same guy anymore, that I’m getting old, that kind of stuff.”

He then later added “I don’t think in 2019 that I became some kind of terrible defender, even though the analytics didn’t like me.”

Reading between the lines here, it sounds like Crawford’s awareness of stats like his -10 Defensive Runs Saved from 2019 (only one shortstop rated worse) or similar numbers from other sources were at least a little bit of a motivating force for him these last two seasons.

I’m sure plenty of hitters are motivated by numbers in their batting statline. I think it’s good to see them motivated by their fielding numbers too.

In acknowledging what made him a better defender in 2021 than past years, Crawford pointed out that he put less wear-and-tear on his body.

The numbers bear that out.

Our Video Scouts track how often a player slides, dives, and jumps. This data actually gets factored into our proprietary injury prediction model. We’ve determined that players who slide, dive, and jump more often have a higher risk of getting injured.

Crawford did go all out for plays less often than he did two seasons ago in a similar number of innings.

So having a little bit of a healthier body could have played some part in the improvement.

But I wanted to see what was tangibly better about Crawford in 2021, particularly as it applied to his range and throwing. He went from -8 Runs Saved in those areas in 2019 to +7 Runs Saved in 2021.

One thing that Crawford referenced was that he took fewer risks on throws. I couldn’t find anything to bear this out within the throwing component of his Runs Saved total, though he did have six throwing Defensive Misplays or Errors in 2019 compared to just two in 2021, so there appears to be some truth to that.

But by our measures, 2021 was all about Crawford’s range being considerably better than 2019 and something more resembling his prime years.

One thing SIS can do is tally out conversion rates for players based on where batted balls are hit.

How Often Did Brandon Crawford Convert An Out On Balls Hit …

Those numbers sound small, so let’s give a little context around them.

In terms of actual plays made, the difference between 2019 and 2021 on balls hit to his left is notable because shortstops make plays on balls hit to their left most often.

Had Crawford fielded the 251 balls hit to his left with the same out rate as he had in 2019, he would have turned 10 fewer batted balls into outs.

That’s a considerable number, especially when you think of it like you’d think of a hitter.

The differences on straight-on balls and balls hit to his right are less stark. The +2% and -1% gaps don’t have the same impact, both because they’re smaller percentages and because there are fewer opportunities on those balls.

So we’ve ascertained that Crawford being better to his left was key to his Runs Saved improvement.

We should note that he improved to a similar out rate on balls to his left in the smaller sample of the 2020 season…so this was about making an improvement and maintaining it for a 162-game season.

But why would he be better to his left?

In 2020 the Giants brought in a largely new coaching staff, with Gabe Kapler replacing Bruce Bochy as manager. And we talked with bench coach Kai Correa, who works with infielders, on The SIS Baseball Podcast in April.

Citing Evan Longoria as an example, Correa said that as infielders aged, it was up to coaches to provide ways to adapt to their lessened foot speed and arm strength. Options to do so are presented to the player like a menu of suggestions to give the player ownership in the process.

In Crawford’s case, we’re guessing the option he chose involved something that moved him back a step or two, to give him more time to react to a hard-hit ground ball.

We say that because these are the average Statcast fielder depths for Crawford.

The couple-feet differential in average depth was consistent whether the Giants were shifting or not.

Also, when Kapler was hired as Giants manager, one of the points he made to Andrew Baggarly of The Athletic about Crawford was that he needed to be “more consistent in his pre-pitch routine.”

That took a little more digging and some hunting through camera angles that showed those moments. It’s video we can’t share here, though I’ll try to describe it. The contrast between 2019 and 2021 was in Crawford’s movement as the pitcher was about to make his pitch.

It wasn’t as dramatic as the crow hop that Kevin Newman of the Pirates used but more of what was described in Baggarly’s article–a slight adjustment in positioning followed by his coming set in a centered position.

He also moved slightly in one direction, which allowed him to move more quickly in the opposite direction (I highly recommend the article linked two paragraphs up to learn more about this). As a result, Crawford was less likely to be caught flat-footed, as he sometimes was in 2019.

The last aspect of this was that the Giants defensive positioning was on-point in 2021, particularly in defensive shifts. They led the majors in our Shift Positioning Runs Saved stat. The good positioning likely made for easier balls to handle AND less need to slide, dive, and jump.

So what does the difference in Crawford 2019 and Crawford 2021 look like on film?

Let’s see if we can sum it up in two sets of plays.

It best shows the benefit of playing a little deeper, as Crawford was at 152 feet, three feet deeper than average, with Anthony Rizzo at-bat.

This is a play worth about 0.6 runs because our out probability for it is only 20%.

It’s very difficult to find plays that are identical, but let’s contrast that with this one:

This play had an out probability over 90%–and we’re making an educated guess that a lot of those outs came on plays where the fielder was positioned a little deeper (our positioning model accounts for lateral position, not depth). On this play, Crawford was positioned a full ten feet shallower than his average in 2021.

And then let’s look at two balls with a lot of zip on them to illustrate the difference in how he reacted to balls.

And here’s a chart to go with it — showing how much better Crawford was in 2021 on hard-hit balls. It’s not close.

Crawford and the Giants did a good job in working together to address the issues that came up as Crawford aged. They identified a weakness and turned into something closer to a strength. And data appears to have played a role in helping out.

Though Crawford has been quoted as saying that he’s not out to improve his defensive metrics, he just concerns himself with winning games, given the Giants’ success, it’s fair to say that the two go hand-in-hand here, no? 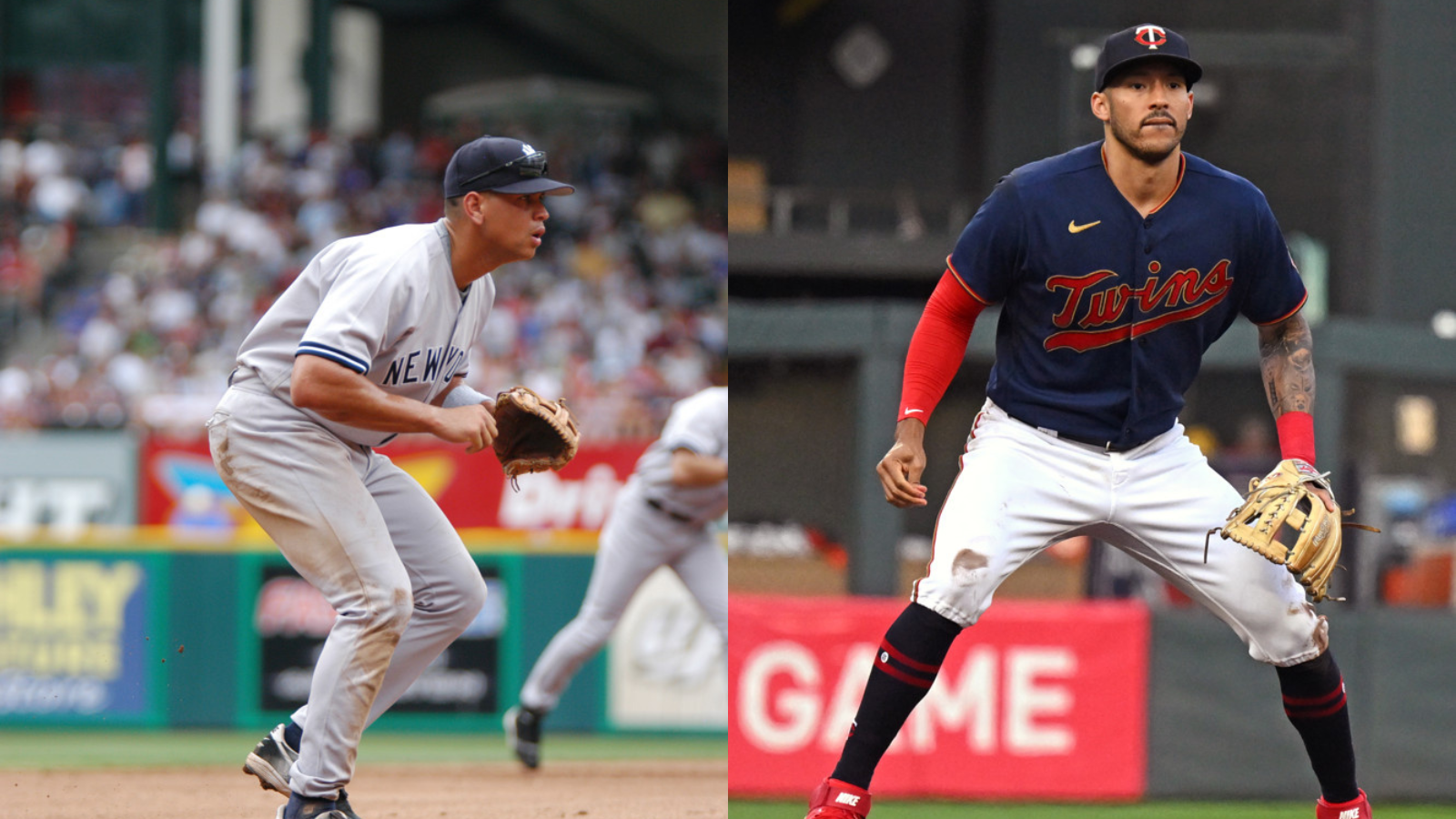 Meet Me At The (Hot) Corner