Trout doesn't rate well in a couple of important areas.

Why would the Angels want to move Mike Trout off center field?

It’s likely a simple matter of statistics. Catches like the one above have been the exception rather than the rule.

Over the last two seasons, Trout ranks 32nd in Defensive Runs Saved per 1,000 innings in center field. That’s out of the 35 players with the most innings played there in that time.

It goes back farther than that. Trout has posted a negative Defensive Runs Saved total in each of the last three seasons and four of the last five seasons.

Trout doesn’t have any statistical strengths on defense anymore. He ranks a little below-average on shallow, medium, and deep fly balls over the last two seasons (though in Trout’s defense, he was slighly above-average on deep balls in his brief stint last season). That adds up.

And he ranks below-average in throwing. Since 2020, he’s allowed 42 of 61 runners to advance an extra base on balls he’s fielded. That’s a 69% advance rate allowed compared to an average rate of 54% for center fielders last season.

Getting back to Trout’s range, we have numbers that can show that Trout isn’t what he once was in center field. We can compare his 2020-21 out rates to those he had in 2018, his last season with a positive Defensive Runs Saved.

Trout isn’t making high-value plays and has missed some balls he should have caught.

Here ‘s one example of the latter:

Comparing ratios of other players with similar innings totals the last two seasons:

Worth pointing out: Trout has ranked last and next-to-last in the reaction component of Statcast’s Jump stat the last 2 seasons.

On average, he’s about 2 feet short of where he should be within the first 1.5 seconds of a ball being hit.

Trout’s potential replacement in center field, at least for the short term would be Brandon Marsh. He totaled -3 Runs Saved in 70 games there last season. Jo Adell’s experience in center field, both in the majors and minors, is minimal, though his elite speed could come in handy if they were to give him a try.

That neither player is necessarily a standout would be one reason to keep things as-is.

That would seem like the most logical outcome here given Trout’s reluctance to switch positions. What we seem to have here is a case of the numbers indicating one thing, but player comfort pointing in another direction. Such is the push-and-pull an MLB manager has to deal with both in trying to win and keep his players happy.

The Angels may move Trout around in the outfield – but only within the boundaries of his original position. 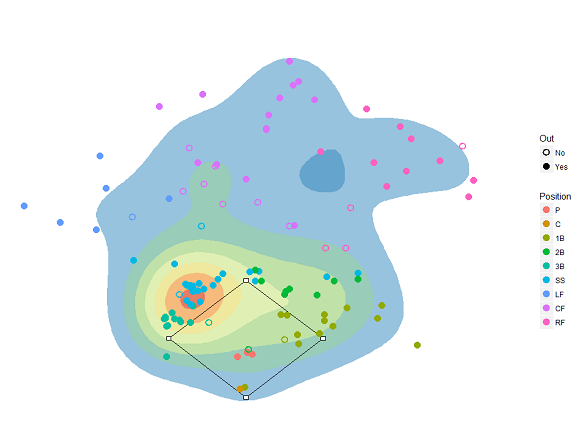