Which outfielders, pitchers, and multi-position players are the top candidates?

Last week and this week, we’re running a two-part series on the top candidates for The Fielding Bible Awards, which will be announced later this month.

The Fielding Bible Awards are voted on by a panel of experts who can vote based on whatever criteria they choose, including observation and subjective judgement, as well as statistical analysis. Each position has one overall winner, different from the Gold Gloves, which has one in each league.

Regarding the multi-position award, last year Bill James devised a system to allow voters to consider and reward players who demonstrate a combination of versatility and the ability to play high value positions (details are in The Bill James Handbook 2022 and will be in the 2023 edition too). Rawlings also added a Super Utility Gold Glove award similar in nature to our multi-position honor.

(Defensive Runs Saved totals in parentheses for all awards except multi-position, which includes rank in Defensive Versatility Score)

It’s a rookie runaway for the top spot on the Defensive Runs Saved leaderboard. Kwan is best known for his start to the season at the plate, but he was consistently excellent in left field throughout 2022. Happ was similarly very good in left field for the Cubs after being moved off center field.

Both Kwan and Happ went well beyond their expected ranges to make plays. Kwan did so dealing with the high wall in his home ballpark in left field. Happ battled windy Wrigley Field and a left field that was unusually deep. No qualifying players were anywhere near their Runs Saved totals.

Taylor will try to join former Royals center fielder Lorenzo Cain as the only center fielders to win a Fielding Bible Award in consecutive seasons. Taylor had by far the best Runs Saved total in the range component of that stat. He faces a tough challenge from Straw, who led all center fielders in Outfield Arm Runs Saved and tied for second in Range Runs Saved.

This is likely going to be an extremely close vote. Aquino and Varsho both posted amazing Runs Saved stats but played fewer than half as many innings as Betts and Tucker. Who will win the Fielding Bible Award could come down to how much playing time matters to our voting panel.

Betts, who led all right fielders in the range component of Runs Saved, is trying for his fifth Fielding Bible Award (he already has the most of anyone at the position). Tucker, who led the majors with 3 home run robberies, is aiming for his first.

This award would seem to be Suárez’s to lose. If you got to watch him at all this season, you were probably impressed. He showed skill coming off the mound to make plays and he held opposing basestealers without a stolen base in 155 1/3 innings pitched this season. Walker has now finished second in Runs Saved two years in a row and is the person most likely to challenge Suárez. Greinke, a two-time Fielding Bible Award winner, was a smidge below his usual standard.

The goal here is to reward excellence in the area of versatility.

Given how good Edman was, even though he didn’t rate as the most versatile player by Bill’s system, we suspect the voters will reward both his skill at the middle infield positions and his reputational versatility (he played a considerable amount of right field in 2019, 2020, and 2021). Varsho is a unique player in that he can catch and play the outfield, and does the latter very well (he’s a contender for the right field Fielding Bible Award too).

Donovan, who ranked No. 1 in Bill’s Defensive Versatility Score, could still win either a Fielding Bible Award or Gold Glove. He played at least 10 games at five spots and was just about average or better at all of them (and very good when filling in for Arenado at third base).

The Fielding Bible Awards winners will be announced on Thursday, October 27. Stay tuned! 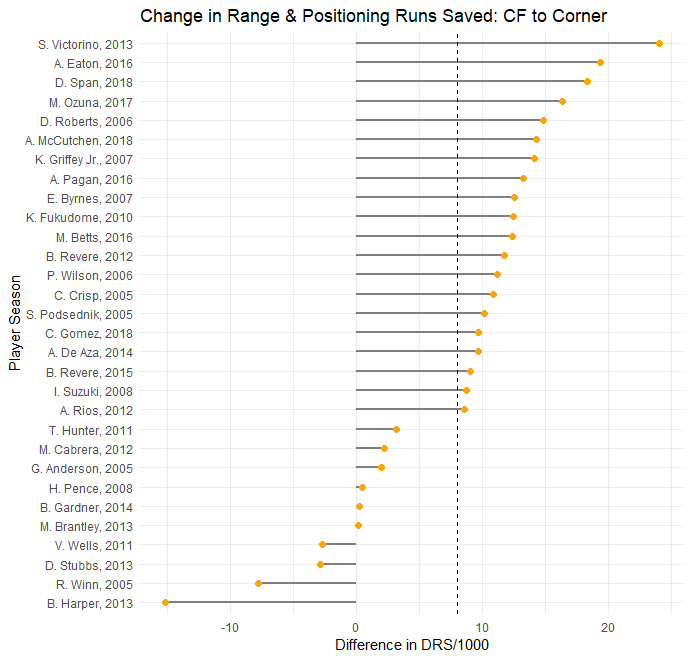