You won’t see a better pitch: The most dominant curveballs

We paid tribute to the changeup last week – looking at some of the best a pitcher had and what that pitch was like on that pitcher’s best day. Today, we move on to the curveball, a pitch that can make hitters look silly, both by inducing wild swings and freezing hitters unable to adjust to the change in speed and movement that they see.

We went through season statlines for the time we’ve been tracking this thoroughly (since 2004) and picked seven pitchers whose curveballs performed amazingly well, then found what that pitch was like at its very best. We’ve detailed that below

This is the very best curveball game in our system and is arguably the best pitch thrown in any game of any type. Sheets was dealing that day, setting a Brewers single-game record with 18 strikeouts. There was nothing wasted for Sheets, who totaled only 116 pitches. Home plate umpire Doug Eddings, long known as a pitcher-friendly umpire, showed a wide plate early on and Sheets took full advantage. Braves hitters were left to flail away and had little chance against the sharp-breaking hook.

“His strike efficiency ratio was huge,” said Brewers manager Ned Yost with a smile. “That’s a big word. I don’t know what it means, but he was throwing a lot of strikes.”

Okay, so this is far from Burnett’s best start overall given that he allowed two runs and walked five, but we’re talking about best performances by one pitch, and this one is ridiculous.

Reds hitters swung at 15 Burnett curves and missed on 14 of them! That pitch must have had some kind of movement that day.

“Thank god I had a curveball,” Burnett told reporters afterwards. “Some of the at-bats, they were sitting on it and it was still pretty good.”

Erik Bedard’s curveball is one that might be forgotten, perhaps because he preferred to stay out of the limelight and didn’t talk to the press much during his 11-year career, and because his career swung abruptly to decline phase. But in 2007 Bedard was one of the top young pitchers in baseball and his curveball dominated. In this game, he took a no-hitter into the sixth inning.

“The guy is dominating and he’s making it look easy and he’s throwing all his pitches for strikes,” said Orioles manager Dave Trembley.

Games like this were what made Bedard look like a future star. The Orioles wound up trading him at just the right time, netting prospects Adam Jones and Chris Tillman in a deal with the Mariners. Bedard’s curveball would pay off for them in more ways than one.

Yeah, we know we could pick Game 7 of the 2006 NLCS when Adam Wainwright sent the Cardinals to the World Series by striking out Carlos Beltran on the best curveball of his life. But we’re looking for games with sustained dominance and that one doesn’t meet that criteria.

This one is pretty good, a game in which Wainwright went nine, but got a no-decision because the game went extra innings. His 12 strikeouts, 10 of which came with the curveball, were a career high.

One point made by Post-Dispatch writer Derrick Goold that is an underrated factor in looking at curveball success was that Wainwright was helped by the “nimbleness” of Yadier Molina, who could adeptly block any hook that Wainwright spiked. Catchers deserve credit for good curveballs too.

You could pick any number of starts from Morton’s 2019 season, as he held opponents to a .151 batting average with the curveball and recorded 275outs with the pitch, the most with a curveball by any pitcher in MLB.

What’s funny though is that Morton’s single best start with the curveball (in terms of outs recorded without allowing a baserunner) came against his former team when he was with the Pirates. It was then that Morton showed the kind of glimmer that shone brightly the last couple of seasons. Yes, he lost, 5-1 to David Price, but after a shaky beginning in which he allowed three runs in the first inning, Morton was basically untouchable for the last six.

Morton has since made major refinements to his game, reducing the use of his sinker for a four-seamer that he could throw consistently at 94 to 95 mph. At this point in his career, he’s got the pitch mix that works best for him, which allows the curveball he threw in this start to thrive now.

This start was peak Corey Kluber, though it was a bit overshadowed by the Indians scoring four runs with two outs in the ninth inning to win the game. Had that not happened, Kluber would have suffered a 1-0 loss despite one of the best starts of his career. This was the 13th start in a 14-start run in which he struck out at least eight hitters in each game. He’s the only pitcher known to do that who isn’t named Pedro Martinez (had a 16 and a 15-start streak) and Randy Johnson (a 17, a 15, and a 14).

So as we’ve been doing this, we’ve looked for starts and we’ve looked for ones in which the pitcher didn’t allow a baserunner. But we’ve made all the exceptions here for the four scoreless innings of relief by McCullers in the winner-take-all Game 7 of the ALCS. McCullers threw 41 curveballs among his 54 pitches, including the last 24 pitches he threw in the game. The Yankees managed a harmless single, but nothing more.  Of the 12 outs he got to earn the save, 11 came with the curveball, a pitch that got an endorsement from the highest of sources.

The same could be said of all of these listed. 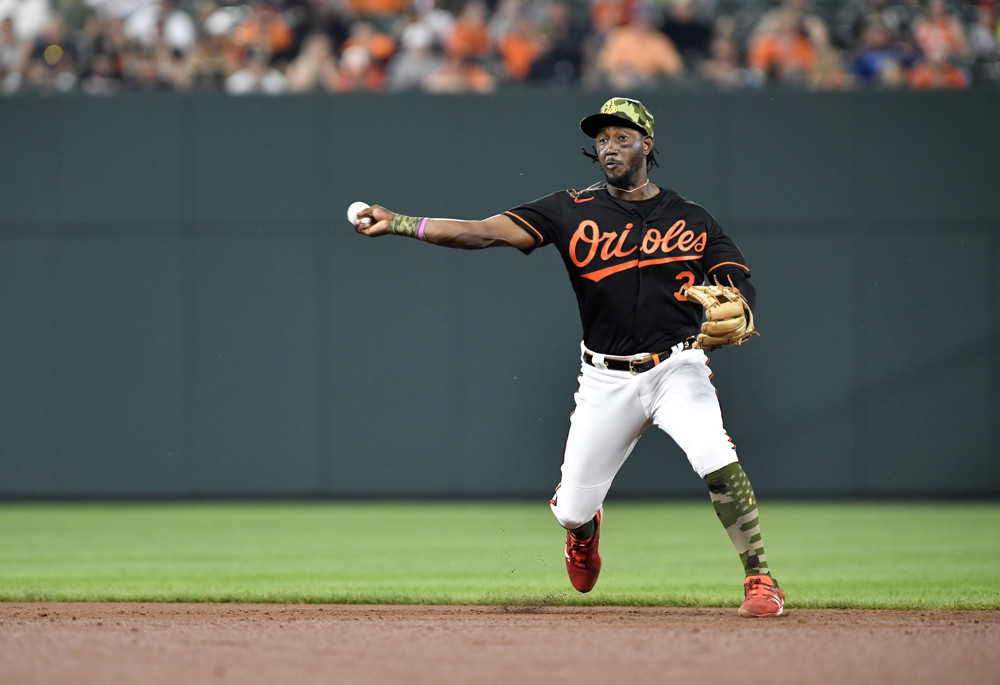 MLB Defensive Player of the Month for May