Tee Higgins. Jalen Reagor and others head the list of those who should be worth considering.

The Colts and Steelers were in unfamiliar territory last season. They were both attempting to rally behind an unproven quarterback, after losing their projected starters unexpectedly. After having matching circumstances and similar results in 2019, the two teams find themselves paralleling each other again heading into the 2020 Draft.

Both teams have traded away their first round pick for defensive help and both need a boost at receiver to help an aging quarterback from the legendary 2004 draft class. Based on SIS’s Total Points metric, only the Eagles currently have a worse receiving corps than the Colts and Steelers.

The good news for the Colts and Steelers is that the upcoming NFL Draft is loaded with premier talent at the wide receiver position. While they won’t be in play for the class’s headliners, they will still have high-level players to choose from when they select at 34 and 49, respectively.

The Colts returning receivers should be better this season if they can stay healthy, as they lost significant time from both T.Y. Hilton and Parris Campbell last season. But, they could still use some help at the position. A deep threat with a large catch radius would be a welcome addition, as Zach Pascal’s team leading ADoT of 11.7 only ranked 55th among receivers with at least 20 targets. New quarterback Philip Rivers is used to getting a lot of help from his receivers.

The Steelers receiving corp took a major step back last season due to multiple reasons. The absence of a starting caliber quarterback, after Ben Roethlisberger’s injury, definitely lowered the group’s potential, as did JuJu Smith-Schuster being miscast as a No. 1 receiver.

The good news for the Steelers is that with Smith-Schuster in the slot, James Washington emerging as a legitimate deep threat, and Diontae Johnson surprising as a third-round pick, they should have some solid pieces this year. Though, they could use some added size on the outside to complement the returning weapons.

The 2020 Football Rookie Handbook is available for $15 from ACTASports.com. If you liked this article and like studying the NFL Draft, you’ll surely enjoy the book. 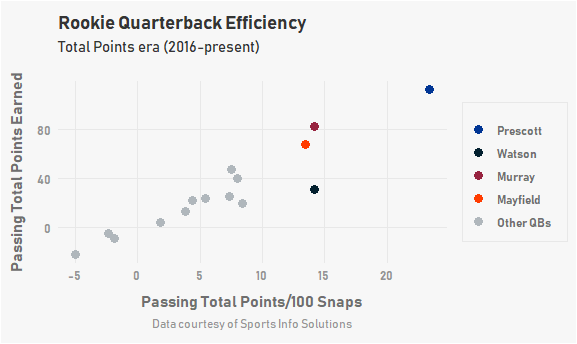