The not-so-curious case of Mac Jones

A careful examination of Jones' strengths and weaknesses.

It’s strange that a prospect as unassuming as Mac Jones has become so polarizing. It would be disingenuous to call his beginnings ‘humble’—Alabama’s out-of-state tuition barely outpaces what his high school alma mater charges—but it is fair to say that he’s been an afterthought for much of his football career.

The Jacksonville native was glossed over by G5 grassroots recruiters UCF and USF and inexplicably wound up at Alabama despite being a three-star with the physique of a seventh-grader who swims with their shirt on. While less-coveted recruits aren’t quite dead on arrival in Tuscaloosa, just 8% of the last 120,000+ NFL snaps played by Alabama alumni have been played by former three-stars.

Nevertheless, David joined Goliath and was seemingly on the fast track to a graduate assistant gig as a Saban-adjacent career backup. But, an unprecedented offseason resulted in a failure to launch for the incoming top quarterback recruit, Jones impressed during camp, and the rest is history.

Now, with the NFL Draft approaching, Jones has become something of a Rorschach test. Many analysts have become enamored with his rhythm, his precision, and his high-volume, high-efficiency production, and we can sympathize with that. Jones’ 2020 campaign was the third-best passing season by volume, and the second-best on a per-snap basis, in the last three years.

There are also those who see a physically limited prospect reminiscent of early Saban-era game managers.

So, it would seem that statistical evaluation and traditional evaluation are at odds again, but that’s not really the case. Although numbers and film often induce cognitive dissonance in those who believe in the value of both, they’re actually two sides of the same coin in Jones’ case.

For example, there are concerns about Jones’ mobility. The NFL is experiencing a changing of the guard at the quarterback position, and there are questions about whether Jones is well-suited for a league that is increasingly featuring some of its best athletes behind center. Only 17% of Jones’ throws in 2020 were made off-platform, one of the lowest rates among Power 5 quarterbacks. That kind of stationary play style is tough to reconcile when you consider the way the pro game is trending. Since 2019, about 27% of NFL throws occurred from a compromised throwing base. Pure pocket passers have been viable in the past, but the trend has been shifting towards mobility for some time now.

Concerns about Jones’ pedestrian arm are validated by how long his passes spent in flight. Over expectation stats are all the rage nowadays, and we can devise such a method here. Contextualizing air time data with throw depth, where the ball is hashed relative to the target, and the quarterback’s throwing platform creates a baseline we can use to evaluate the relative quickness with which a quarterback’s passes arrive.

In this category, Jones was dead average for a college quarterback, which is not particularly reassuring. Comparatively, the passes of Zach Wilson (-0.08), Trevor Lawrence (-0.07), Justin Fields (-0.03), and Trey Lance (-0.02) all arrived ahead of schedule. But, because it’s difficult to conceptualize how meaningfully different a few hundredths of a second are, this can be put in more practical terms. If Lawrence and Jones both throw a pass that travels 15 yards, we can expect Lawrence’s throw to win that race by about a yard and a half.

There are other proxies by which we can judge Jones’ arm talent. His reluctance to throw to the outermost receiver in trips is one of them. A curiosity of the college-to-pro transition is the change in the playing dimensions. The fields are the same width, but the hashes are nearly twice as wide in college as they are in the pros. As a result, throwing the ball to the wide side of the field is more difficult in college, at least in a Pythagorean sense.

In light of both this phenomenon and the relative inferiority in arm talent, defensive coaches at the college level generally like to know if they need to respect the outside receiver in trips. Wilson (27%), Fields (20%), and Lawrence (17%) came in above the average target rate (15%) to varying degrees, but Jones (11%) fell short of the mark. While this specific aspect is not directly translatable to the NFL, the fact that Jones targeted this alignment at a below average rate could be seen as a feather in the cap of his detractors.

More generally, his low average depth of target (ADOT) of 8.3 yards is another stat we can use to judge his arm strength. Of course, this is admittedly simplistic and is confounded by the rate at which he threw RPOs and screens. 27% of his dropbacks were RPOs or screens, and while that’s comfortably above the NCAA average of 20%, it is less conspicuous than the players hovering in the 35-50% range. This is, however, a good opportunity to segue into more systemic concerns.

A whopping 58% of Jones’ dropbacks were RPOs, screens, or play action passes.

A whopping 58% of Jones’ dropbacks were RPOs, screens, or play action passes. That was the third-highest rate among eligible Power 5 quarterbacks (minimum 100 attempts) and can make evaluating Jones difficult, regardless of whether you choose to do so statistically or traditionally. While he might have been effective outside of this split (0.51 Total Points/Snap), 181 plays is not a lot to work with, especially considering how good his supporting cast at Alabama was.

Although it is nowhere near as precise as tracking data, yards after the catch before contact (YACBC) is a crude instrument that can give us a sense for how open a quarterback’s receivers generally were. Jones’ receivers averaged 5.4 YACBC, which ranked 3rd among FBS teams and 2nd among Power 5 teams. This is likely unsurprising considering his connection with Heisman winner Devonta Smith.

Furthermore, Jones was hurried six percentage points below the average rate, and when he was hurried, pressure arrived a tenth of a second later than the average. Of course, a quarterback owns some of his pressure rate, but things won’t be so easy in the NFL.

Thus far, much of this article has been spent focusing on the criticisms of Jones, but advanced stats also convey the strengths he shows on film. He took great care of the football, as his turnover-worthy throw rate was just 2.0%—good for 7th in the country among the 134 players with at least passes.

He also processes quickly and gets the ball out in a timely manner. Time to Throw Over Expectation (TTOE) is a metric that considers drop type and play action to set a benchmark for how quickly the ball should come out. Jones’ TTOE of -0.24 ranked 14th among the aforementioned group, but he was far more productive. The thirteen players who ranked ahead of him combined for 244 Total Points. Jones himself accounted for 196.

Lastly, he is very accurate by basically any statistical measure. He ranked first in the oft-misleading completion percentage (77.3%), but also placed first in On-Target Rate (85.1%) and fifth in *On-Target +/- (8.8%).

*On-Target +/- is similar to NextGen’s CPOE, except that passes are judged by whether or not they were thrown accurately when compared to expectation. Read more about this in The SIS Football Rookie Handbook 2021.

So, what do the stats indicate? They tell us that Jones is a statuesque mover who will need to prove he can be comfortable in NFL pockets after being royally protected in college.

They tell us that he doesn’t have the juice to make all the throws and that tight windows may be a problem in the pros after making a lot of wide open throws at the college level.

They also tell us that he avoids mistakes, is accurate, and sees the field and gets the ball out quickly.

Witnesses to Jones’ play tell similar tales. So, we’ve achieved consensus on who Mac Jones is as a player. The red flags do indeed manifest themselves statistically. The question now is: who will bank on Jones continuing to overcome his physical limitations after leaving the nest? 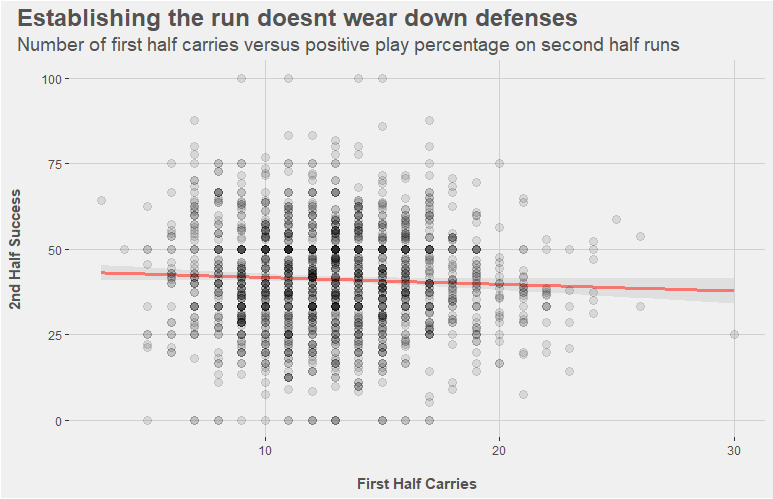