Which infielders are the most aggressive at going for ground balls when another fielder may be in better position to make the play?

A few years ago, MLB’s Mike Petriello wrote about Odubel Herrera being the “Kelly Leak” of outfielders, meaning that he often tried to field balls that were more difficult for him than it would have been for his teammate.

The reference comes from “The Bad News Bears,” in which the character Kelly Leak would try to win at all costs, including going all-out to field any ball he had a shot at, even if another player was in better position. It’s great that you can get to a wide range of balls, sure, but sometimes it’s better to let someone else handle the play.

With the new Defensive Runs Saved calculation we implemented a few months ago, we calculate the out probabilities necessary to answer this question for infielders. We can use the batted ball characteristics as well as the starting positions of each fielder to find plays where the corner infielder snags a grounder that the middle infielder actually had a greater chance of turning into an out.

An example of how things can go very wrong would be this play, where Wil Myers ranges to field a ball that Freddy Galvis was very much in position to field, and he goes on to airmail the throw.

Let’s take a look at the leaders in this bittersweet statistic. To qualify, the middle infielder who was cut off must have had at least a 20 percent chance of making the play if he had fielded it.

Most Plays Fielding a Grounder When a Deeper Infielder Had a Better Chance
2017-19 Corner Infielders; other infielder had at least a 20 percent out rate

What should be clear from the names on this list is that grabbing grounders that the numbers suggest you shouldn’t isn’t an indicator of poor defensive quality overall. Many of these names have made numerous appearances on Fielding Bible Award ballots in recent years. In fact, even on these potentially-troublesome plays, all of the players on this list saved runs in aggregate, with Alex Bregman’s eight runs leading the way.

In general, that’s the case. Even if you make things harder on your team by ranging to make a play that another fielder might have made more easily, you are still likely to make the play. Of course, the onus is on you to execute once you field the ball, else you end up being the goat.

Five players in the past three years have “Kelly Leaked” their teammates at least ten times and have cost their teams runs overall across these situations. Interestingly, two of them are Cubs infielders with strong defensive skill sets, so being on this list isn’t necessarily an indicator of faulty defensive instincts.

Say it Ain’t So, Renato!

One player had a really rough go of things in this regard. In 2019 alone, on just three plays at first base, Orioles first baseman Renato Nuñez cost his team more runs than any of the above players by cutting off the second baseman on short grounders.

On this play, Nuñez dove and then airmailed a throw from his knees. Rockies outfielder Raimel Tapia was running, so there was some risk associated with letting the ball by, but the second baseman was in good position and as you can tell Tapia wasn’t far down the line.

This play was a much easier play for both possible fielders, as you can see by their positions. With a much slower Rockie running this time (Daniel Murphy), Nuñez again fails to complete the play by tossing the ball behind the pitcher coming over to cover the base.

This last play ends up being quite close, to the point that it might not have worked out even if the second baseman fielded it. Ketel Marte is running here, so again there’s some urgency, and again Nuñez throws behind the pitcher covering the base.

Nuñez’s ill-advised attempts granted three baserunners when letting the ball get to the second baseman likely would have eliminated them. Even if better throws would have changed the result, it’s important to emphasize that part of the reason Nuñez was in a worse position to make these plays is that the first baseman is moving away from the play when trying to make the throw to first, so the risk of an errant throw is part of the equation.

While it hasn’t been the case for Nuñez, it is interesting to find that making inefficient split-second decisions in the field isn’t a deal-breaker in terms of your value as a defender. Of course, it helps to be an excellent defender, because you can make up for those foibles on the back end. 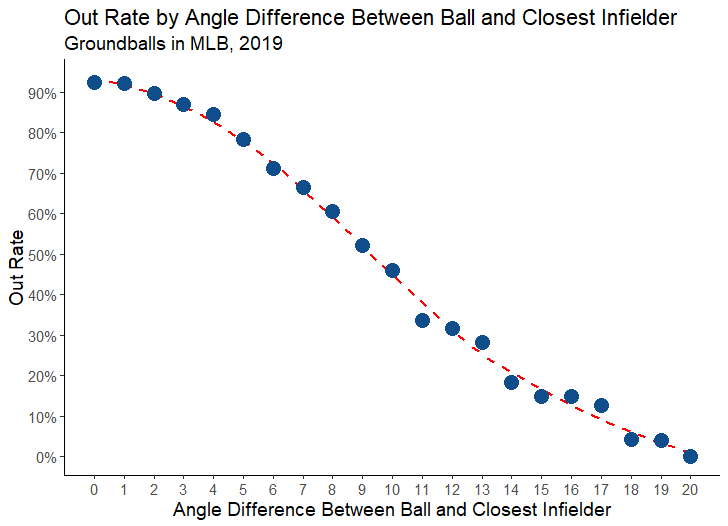