World’s No. 1 QB Rankings Through Week 8

Our latest look at our NFL QB rankings zooms in on Philip Rivers and Jared Goff.

By MARK SIMON AND ALEX VIGDERMAN

As we wrote for Sharp Football a few weeks ago, Rivers was not necessarily as bad as he looked in that Colts Week 5 loss to the Browns. He now checks in as the No. 8 quarterback in our World’s No. 1 Quarterback Rankings, which we introduced last week (click here to read).

Rivers undid the statistical damage he inflicted upon himself in that Browns loss with by far his best games of the season against the Bengals and Lions, which moved him up to his current spot. In fact, he ranked second in Points Above Average in quarterbacks in Week 8 behind only Patrick Mahomes. That was driven by three touchdown passes and good numbers on passes 10-to-19 yards downfield (5-of-9, 88 yards). That staves off any calls for capable backup Jacoby Brissett for the time being.

Our current Top 10 in the World’s No. 1 Quarterback Rankings is as follows

A reminder of what this is: The World’s No. 1 Quarterback Ranking is based on a model devised by Bill James to evaluate The World’s No. 1 Starting Pitcher. Bill’s model was based on cumulative evaluation of individual starts over an extended time period using the metric Game Score.

The World’s No. 1 Quarterback Ranking uses our player value stat, Total Points to make a cumulative evaluation of game performance over a three-year period. The key to our calculation is how a quarterback performs in Points Above Average Per 60 Snaps in each game over a three year period.

Points Above Average is the statistical underpinning of Total Points, just centered at zero so that positive numbers are above average and negative numbers are below average. Success over time is key to maintaining a good ranking. Prolonged inactivity results in a ranking drop. The recent performances carry the most weight. Understand too that this list includes some oddities (yes, Taysom Hill is ranked ahead of a bunch of starters) that are products of our ever-evolving system. Also, we’ve kept in anyone who played a snap in the last three years, even 21 QBs who aren’t in the league any more.

Patrick Mahomes, Russell Wilson and Aaron Rodgers rank No. 1-3. Mahomes widened his lead on Wilson by a smidge after each had a great game in Week 8 (Mahomes with five touchdowns vs the Jets, Wilson with four against the 49ers). Rodgers’ numbers held steady in the No. 3 spot. He’s not likely to quickly jump past either Mahomes or Wilson unless he has a great game and they have a poor one.

Among the surprises in the initial rankings were how well No. 4-ranked Derek Carr did, which was attributable to excellent performance on third down last season.

As for Rivers, the competition gets tougher the next several weeks with the Ravens, Titans, Packers, Titans, and Texans up next.

The top six quarterbacks remained the same as a week ago. Rivers moving up two spots slid Matt Ryan and Josh Allen down one each. Ryan moving down a spot was a product of circumstances. He had the fourth-highest Points Above Average total for Week 8 but that happened to be two spots behind Rivers (though he’s only a hair behind).

Drew Brees and Tom Brady are in a virtual tie for the No. 5 spot after Brees had the edge entering the week.

But Brees lost value for a fumble and a dropped interception, and Brady doesn’t suffer any significant demerits.

Last week, Jared Goff was close to being a Top-10 quarterback. He ranked 11th in our No. 1 QB Rankings. This week he ranks 20th.

Goff plummeted because he had the second-worst game by a quarterback this season per Total Points Above Average. He was 35-of-63 for 355 yards and compounding a completion percentage (58%) that was about eight percentage points below the NFL average, were two interceptions and two lost fumbles. The only game to score worse in 2020 was Carson Wentz’s similar game (albeit with eight sacks instead of Goff’s two) in Week 1 against the Redskins.

This was Goff’s third straight game with a negative Points Above Average. He entered Week 6 as the No. 7 ranked quarterback but these struggles have dropped him 13 spots.

Lamar Jackson’s four-turnover game against the Steelers cost him five spots in our rankings, sinking him to No. 23. This game ranked as the fourth-worst by a quarterback this season. He had the third-worst game of the season in Week 5 against the Chiefs.

Let’s be fair to Jackson and acknowledge that the two games most responsible for his current ranking are against teams that are a combined 14-1, and that there is currently no adjustment for quality of opponent in our rankings. Had Jackson played at an NFL average level in those two games, he’d be ranked just outside the Top 10.

Let’s also note that he could have a hard time moving up the rankings as they currently stand. Three of his next four games are against the Colts, Titans, and Steelers.

The full rankings are below. 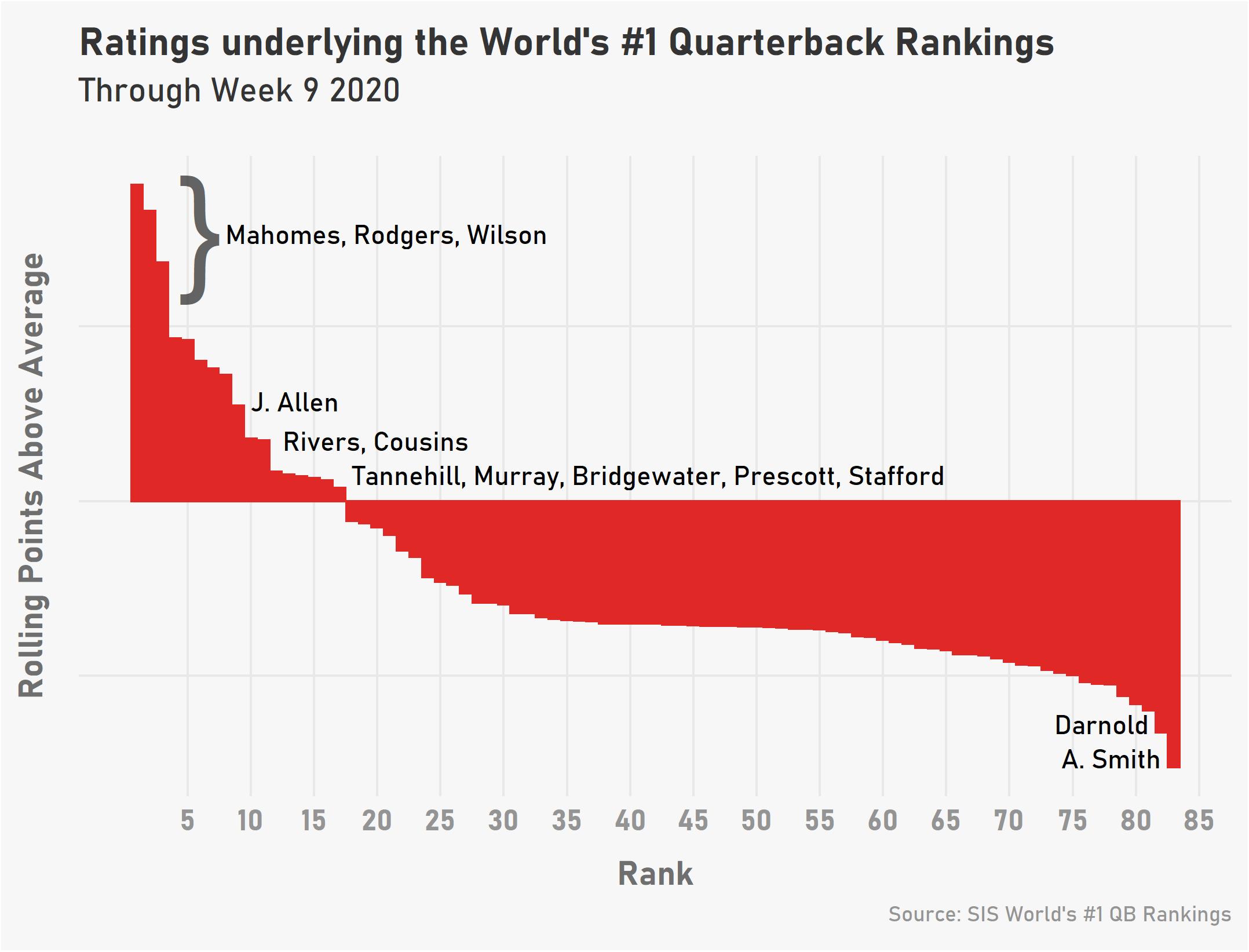