Jack Leiter has all the tangible and intangible tools you look for in a pitcher.

Leading up to the 2021 MLB Amateur Draft, Sports Info Solutions will be publishing a series of scouting reports from three of our Video Scouts for the top-10 collegiate draft prospects. Each player is graded by the 20-80 scouting scale, given a comprehensive evaluation, and assigned a floor and a ceiling comparison, which indicate–if a player makes the Major Leagues–the range of the type of player into which he can develop.

He certainly did not look like a freshman. He looked like a seasoned veteran on the mound all season long. His dad Al Leiter and uncle Mark Leiter were both successful MLB pitchers. It’s easy to see that Jack has been able to pick up some important things from them along the way.

Leiter did some amazing things during the 2021 campaign, most notably throwing a no-hitter in his first SEC start against a powerful South Carolina offense. That game was part of a 20 2/3 innings hitless streak over 3 games for Leiter. He was completely dialed in. Leiter finished the season with 2 CG, the no-hitter and a CG loss to NC State in Omaha at the College World Series. He had 10 starts with at least 10 strikeouts and pitched less than 5 innings in only one start. He was an absolute workhorse all season long. With Leiter and Kumar Rocker it is easy to see why Vanderbilt was so close to a National Championship.

There really isn’t such a thing as “perfect mechanics” but Leiter comes as close as you can get. He has great rhythm and balance in his delivery, and can repeat it every single pitch. He throws from the 1st base side of the rubber, with a high 3/4 arm slot. From the windup he takes his hands over his head and pauses, to do a couple of toe taps to collect himself, then gets after it with great momentum going toward home.

He brings his knee all the way up to his chest on the leg kick. When he is in the stretch he varies the type of leg kick he uses, he does a great job of keeping the runner and batter off balance.

One thing you notice when you look at Leiter are his legs. He has an incredibly strong lower half and he knows how to use them to his advantage. At 6’1” Leiter is on the smaller side for a pitcher but he uses all of his frame in his delivery. He uses his back leg to push off the mound before releasing the ball and gets great extension down the mound. This makes his explosive fastball appear even faster to the hitters because he’s able to throw it from a couple inches off the rubber.

Leiter’s fastball is his best pitch and potentially the best fastball in the nation. It appears like it’s being shot out of a cannon once he releases the ball. It usually sits around 90-95 mph but because of his extension down the mound it appears even harder. He gets rising movement on the pitch, which causes hitters to swing under it very often. It’s his best swing-and-miss pitch because of that rise, and it also helps that he can dial it up to 98 mph.

His control is usually spot-on with his fastball, he lives on the edges of the plate or anywhere up in the zone. He loves to use it in big spots, he trusts that his fastball can beat whoever is at the plate. Whenever he needed a big strike he would go right at the hitter with his fastball. Mentally, Leiter is ahead of every college pitcher in that he is extremely polished. He shows this when around pitch No. 100, he can throw his hardest fastball of the entire game. He knows he doesn’t have to be all-out every time he throws it, because even at 92mph it’s still elite.

Leiter’s second best pitch is his sharp 12-6 curveball (74-80mph) that he can throw in two different ways. Similar to Tyler Glasnow’s curveball, he can bounce it or drop it out of the sky for a strike. When he wants to bounce the pitch, the ball will start around the belt or chest for the batter, then disappear below the strike zone. The pitch stays on a straight plane before dropping off a cliff. It tunnels exceptionally well with the fastball and has great depth to it, which translates to frequent swings-and- misses. Even if the pitch is 58 feet and bounced he can still get whiffs.

The curveball that he throws to drop in for a strike starts above the strike zone, usually above the batters head, then drops right into the middle of the zone. Because it starts so high the batter will give up on it right out of Leiter’s hand. Then all of a sudden the ball will be right in the zone, leaving hitters baffled.

To really become a No. 1 starter Leiter will need to improve either his slider or changeup to give him a legit 3rd pitch. Throughout 2021 he threw his slider way more than his changeup and at times that slider looked very good but it was too inconsistent. He used the slider mostly outside to RHB and the changeup mostly to LHB.

At its best the slider (78-85mph) has sharp horizontal movement, almost more like a cutter. Occasionally he would get more vertical drop to it and it would appear more slurvy. The slider he throws that is more similar to the cutter will most likely be the better one.

When it’s slurvy it appears similar to his curveball and doesn’t have that much of a speed differential to throw hitters off. Either way he wants to throw it, it will be important for him to develop a pitch that can work horizontally off of his fastball and curveball to both RHB and LHB.

When he struggled to command the slider it would back up and have lazy break. This is obviously a big problem when throwing a slider because it backs up right into the middle of the zone and sits on a tee for the hitter. It would not be a surprise to see him develop a nasty slider as he progresses through the minors, he’s shown he has the ability to do it. Consistency will be the key.

Leiter’s other option of developing a reliable 3rd pitch is his changeup. The changeup (77-86mph) has good fade to it but doesn’t have that “pulling the string” movement that the best changeups have. When he struggles to throw the changeup it floats out of the zone to Leiter’s arm side or he spikes it into the dirt. He would try to throw it at least once every start but never used it as part of his gameplan. It’s a good sign that he still wants to use it to keep hitters off balance, he needs that speed differential and horizontal movement.

Leiter’s control is extremely on point most of the time. The amount of times he can throw a pitch right to the catcher’s glove throughout the game is impressive. He does it more frequently than some MLB pitchers do. He can attack any part of the zone to RHB and LHB and he can use any pitch. Of course, he has better control of his fastball and curveball, he can throw them anywhere he wants.

He does run into control issues at times. For some reason he gets wild and struggles to throw strikes. He had 11 starts with at least three walks.

The thing that really separates Leiter is on the mental side of the game. Having a dad and uncle that were both MLB pitchers gives Jack insight that many college players don’t have. It’s easy to tell Leiter is comfortable and confident on the mound but he is also as intense as it gets. He is only 6”1’ but he is an intimidating figure on the mound when he is peering through his glove, waiting for his signs, ready to attack whoever is in the box. When they show him on the mound compared to when he’s on the bench, he looks like a completely different person.

Between the lines he looks like a polished professional. If a call doesn’t go his way or he gives up a home run or walks a couple hitters he never wavers. He stays even keeled whenever he is out on the mound, he never shows the opposing team that he is vulnerable. He always attacks hitters with whatever pitch he feels is working the best that day and can adjust to what the opposition’s game plan is. Teams tried to be aggressive and attack his fastball early so Leiter would pitch backwards and throw his curveball, slider, or changeup early in the count. Some teams tried to be patient and force Leiter to beat himself but he would recognize it early on and go right at hitters.

When Leiter threw his no hitter on March 20, he had 16 strikeouts, all on the fastball. He knew it was electric that day and he knew South Carolina couldn’t touch it so he stayed with it. He didn’t try to get too cute and mix his pitches. He went right after the hitters.

After the game Leiter said he didn’t have his best secondary stuff for most of that day but figured it out late in the game and mixed them in more. His awareness to not only stick with what works but to realize he got his secondary pitches working late in the game is so impressive.

The fact that Leiter isn’t a lock for the No. 1 pick in the draft speaks to how loaded the top of this draft is. His 4-pitch mix plus his maturity and intensity on the mound usually adds up to a No. 1 overall selection. Leiter will need to improve his slider and changeup and settle down his control to become a top MLB starter but he seems like the type of player that will be willing to put in the work.

His projected floor and ceiling are set extremely high but as long as Leiter stays healthy I don’t see any scenario where he isn’t successful in the majors. He has all the tangible and intangible tools that you look for in a pitcher. 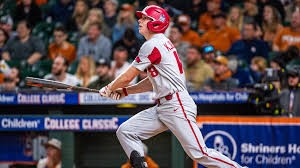