The Bengals QB and Kyler Murray have had a nice upward movement on our World's No. 1 QB list.

It’s been awhile since we last updated the World’s No. 1 Quarterback Ratings.

The biggest development in the last seven weeks is the rapid and recent ascent of Bengals quarterback Joe Burrow, who just made his way into the top 10.

Burrow spent the first year and five weeks of his pro career usually ranked in the 20s. He stood at 34th after a rough Week 2 game against the Bears, but then turned the corner with five straight games of above-average performance. Still, a rather blah Weeks 11, 12, and 13 left him sitting at No. 21.

Then came Week 14 against the 49ers in which Burrow was 25-of-34 for 348 yards and two touchdowns. That game moved him six spots in the rankings to No. 15. Two weeks later, his 525-yard, four-touchdown game against the Ravens both moved the Bengals into the AFC North lead and bumped him to the No. 10 spot in the rankings.

He now sits one spot behind Vikings QB Kirk Cousins (who was the subject of our last article … he’s since dropped from his midseason No. 2 ranking).

There’s still reason to be wary of Burrow, of course. He’s the NFL leader in both sacks and interceptions thrown. But he also leads the league in catchable pass percentage (89.5%) and on-target percentage (83%). Burrow ranked in the top seven in both of those stats last season, perhaps providing some foreshadowing for what’s happened in the latter part of this season.

The other jump of note belongs to Kyler Murray, who is now a career-best No. 6 even as his team is sputtering with three straight losses. Murray recorded 7.7 PAA last week against the Colts, his second-highest PAA of the season. As such, he moved past Matthew Stafford, Derek Carr, and Cousins, each of whom had negative PAA last week, in our rankings.

For the season, Murray has jumped nine spots, as he entered 2021 at No. 15, a deserved ascent given that he started the season with eight straight PAA-positive games before getting hurt.

Murray has nearly tripled his Points Earned from 2020 on passes thrown at least 15 yards downfield. His surface numbers don’t look that much better, but it’s worth noting that Cardinals receivers have dropped a league-leading eight passes of 15-plus yards this season.

The only quarterback with more points earned than Murray on throws of this depth is … Burrow, who has made major improvements to his intermediate and deep passing games since last season.

Having Ja’Marr Chase makes a huge difference. Burrow is 16-of-34 with 6 touchdowns when throwing a pass of that depth to Chase (and Chase dropped five of the 18 incompletions). He’s also 14-of-28 when throwing those to Tee Higgins, compared to 14-of-35 last season. 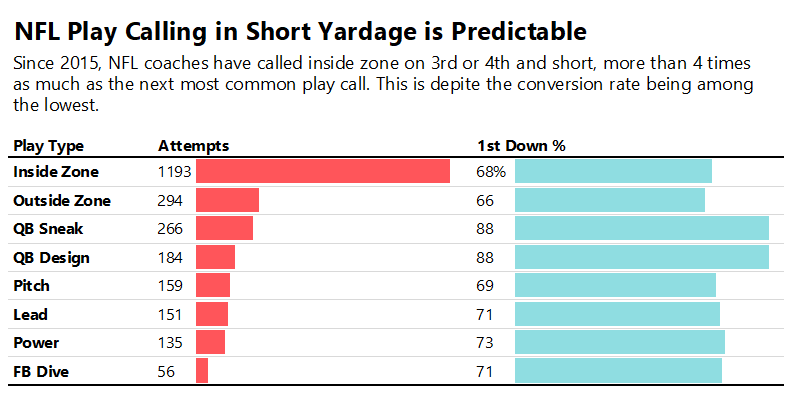 The QB Sneak is the most underutilized play in football