From Heinicke to Brady: Joe Burrow’s Climb Up the QB Rankings

In a Week 2 loss to the Bears, Joe Burrow threw three interceptions and was sacked five times.

That dropped him nine spots in our World’s No. 1 QB Rankings. After that game, Burrow ranked 33rd. For perspective, at that moment he was eight spots behind Washington QB Taylor Heinicke. Heinicke and Burrow basically changed places in Week 2. Burrow went from 24 to 33. Heinicke went from 34 to 25 after beating the Giants.

And for what it’s worth, Heinicke ranks third-to-last, ahead of only Ben Roethlisberger and Mike Glennon.

But we’re here to focus on the Super Bowl QB.

A reminder that The World’s No. 1 Quarterback Ranking is based on a model devised by Bill James to evaluate The World’s No. 1 Starting Pitcher. Bill’s model was based on cumulative evaluation of individual starts over an extended time using the metric Game Score.

That last sentence is Burrow’s season story. He ranked as low as No. 33 as we noted. After a six-sack, two-pick game against the Chargers in Week 13, he ranked No. 21, two spots behind Jimmy Garoppolo and 15 places behind Kirk Cousins, of whom he now sits one spot ahead. Since Week 14, which was actually a loss to the 49ers, Burrow has played at a different level, with 15 touchdown passes, 2 interceptions, and ranks top-two in completion percentage, catchable pass percentage, and on-target percentage (including the postseason).

But maybe we could have seen this coming. Even in Weeks 1-13, when Burrow had 23 TD passes and 14 interceptions, Burrow led the NFL in catchable pass percentage (89%) and was 2nd in on-target percentage (83%).

Burrow’s on-target percentage was actually one percentage point better in Weeks 1-13 than it has been from Week 14 to now.

Where Burrow’s growth has come that has led to his jump up the rankings is in his play when pressured. Yes, he’s still taking his fair share of sacks (remember the nine times he went down against the Titans), but when he’s able to get the ball out, he’s done much more damage relative to what he was doing earlier in the season. He’s looked to shorter passes for greater success.

Case in point against the Chiefs, where he was 9-of-14 for 120 yards and a touchdown, including two key first-down completions to Tee Higgins on the drive at the end of the first half that cut KC’s lead to 21-10

Burrow When Pressured in 2021

The Rams’ pressure will be a different kind of pressure than any Burrow has seen this season.

But hey, if you want to win a Super Bowl and keep climbing the World’s No. 1 QB Rankings, you’re going to have to get past the biggest obstacle in your way at some point.

Here’s the full set of rankings. 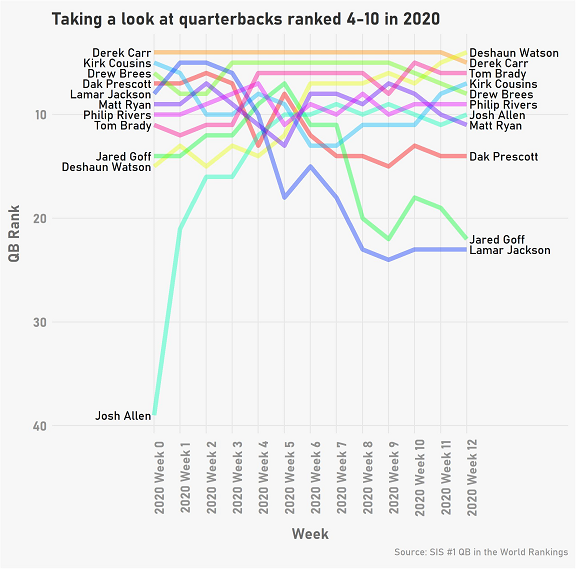