This essay appears in The Bill James Handbook 2023, which can be ordered online at ACTASports.com or wherever you get your books.

In 2022, baseball has embraced the shift in how pitchers attack hitters. With so much data and numbers, pitchers can gameplan against lineups each and every game.

This year the league embraced breaking balls and offspeed pitches. In the most pivotal moments in a game, pitchers threw non-fastballs to get hitters out. Pitchers such as Corbin Burnes and Emannuel Clase throw hard pitches with cutting action that are almost impossible to hit.

Sandy Alcantara is the ultimate pitch-mix wizard. With arguably the best pitching season this year, he has become a balanced force of power and movement coupled with excellent command and three pitches he can throw in any count. Sandy’s pitch mix is masterful. He threw 28% changeup, 25% two-seam FB, 25% four-seam FB, and 22% slider. He sprinkled in seven curveballs and scrapped that pitch because why not throw your three most dominant pitches as much as you can?

Note: Alcantara’s pitch-mix wizard status isn’t fully reflected in the chart at the bottom of the story, as it groups four-seam and two-seam fastballs together.

The two-seam moves violently at 100 mph. Pair this with the movement and deception of his changeup that baffles hitters at around 92 mph as it dives to the plate. A hitter can’t sit on just one pitch, and it’s what makes him so special!

Next, look at the pitch that is returning as the go-to pitch for many pitchers, the slider. With the advances in technology and analytics, players can fine-tune their arsenals and look at pitch grips with high-speed cameras and tinker with specific grips or arm actions to create a certain type of movement profile.

A perfect example of this is Dylan Cease, who started throwing a slider with sharp vertical action this year. He threw the pitch 43% of the time, while only throwing his fastball 41% of the time. Cease identified a breaking pitch that worked for him and began to tunnel it off of his fastball as much as he could. The slider plays in and out of the zone as Cease racks up swings and misses.

Cease ranked 10th in putaway rate, throwing 472 sliders with two-strike counts and striking out 131 hitters for a 27.8% strikeout rate. The pitch has become a nightmare for hitters. Even when they know it’s coming, it’s very difficult to pick up. Only Cease and Robbie Ray threw at least 400 sliders in two-strike counts this year.

Now, what happens when you throw your best pitches to one specific spot in the zone? Well, you get Edwin Díaz’s usage of slider and fastball. Not only does he have one of the best if not the best closer entrance in baseball—cue the trumpets—he also features a devastating two-pitch arsenal that he relentlessly throws glove side to hitters. Diaz led the league in putaway rate among pitchers who threw at least 150 sliders (38.4%). With his menacing slider that breaks glove-side with incredible late movement, batters rarely put good at-bats together against the Mets shutdown man.

Sure, at times he would miss and spray the ball, but his goal was to throw glove side as much as possible. When you throw triple digits and have a slider in the low 90s you can torment hitters, even when they know what pitch is coming and where it’s being located.

The harder slider is not the only pitch that became more popular this year. The league saw a shift towards more sweepers being thrown than ever before. The movement profile of this pitch type is hard to pin down sometimes and can’t just be classified into one pitch, although it is mostly thought of as a slider with more horizontal break because of the spin profile. The rise in slider usage can be attributed to the growing amount of sweepers being thrown throughout the league.

Then there are two players such as Shohei Ohtani and Yu Darvish who could teach a master class on how to vary arm angles and pitch location along with an advanced pitch repertoire. The two Japanese pitchers dazzle and amaze with how they are able to manipulate and spin the baseball.

Ohtani added a couple of new pitches down the stretch this season with a ridiculous two-seamer that reached 100 mph at times and new variations on his slider that move with depth or sweep depending on how he throws it. Dropping his arm angle at times, he also mixes pitches based on feel for that particular day in terms of his cutter, splitter, and curveball.

What about Darvish? Well, he throws 11 different pitches and has many different types of one particular pitch, some of which are hard to classify and chart. There’s his slow cutter which he uses to set up the rest of his repertoire tunneling-wise. There’s also the harder cutter he throws up in the zone. With two types of sliders, including a spiked slider grip that he can modify, Darvish keeps hitters off of his cutters.

Darvish also has two distinct curveballs to mix in with a sharper harder one in the 80s, and a slow cartoonish looping one that he throws in the low 70s. He even threw a curve at 64 mph this year and will routinely try to freeze hitters or have them out in front on these rainbow curves. His four-seam and two-seam fastballs are thrown more to right-handed batters than left.

Both still get plenty of game action, but in the end, he wants to spin the baseball. Add in a splitter and rare changeup that he pulls out every once and a while to left-handed hitters and you have an array of pitches to choose from. I didn’t even mention a couple of other pitches he throws that are truly hard to classify. Darvish has fully embraced his outstanding ability to spin the baseball and throw more breaking pitches.

Pitchers’ repertoires can be unique and yet similar, like Ohtani and Darvish. If you love pitching as much as I do, you might find some interesting quirks and even some trends in this vast collection of data.

For the purposes of this online article, pitchers are listed in order by their Pitch Mix Index (PMI), which indicates diversity of repertoire. The higher the number, the more diverse the repertoire is. 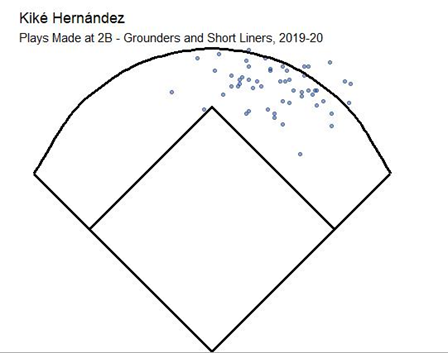 Kiké Hernández is a defensive gem