Filling out my Fielding Bible awards ballot for the first time was exciting and difficult.  Fielding is tough to measure, but Baseball Info Solutions helps provide data to help with that issue.  As video scouts, we get to watch baseball for hours every day, giving us a pretty good idea how good defenders in MLB […]

Filling out my Fielding Bible awards ballot for the first time was exciting and difficult.  Fielding is tough to measure, but Baseball Info Solutions helps provide data to help with that issue.  As video scouts, we get to watch baseball for hours every day, giving us a pretty good idea how good defenders in MLB are. Obviously, we cannot watch every inning of every game. That’s why the data we collect at BIS is so helpful.

In making my selections, I started by looking at the DRS leaders and went from there. I attempted to find a balance where all or most of the defensive metrics agreed on a player. After DRS, I dug into the more detailed data we keep at BIS, including “good fielding plays,” “defensive misplays,” as well as scout’s defensive rating. I also looked at how often players converted on each difficulty grade (1 through 5). Different things can be looked at for different positions as well, but I’ll explain those later.

First base is one of the tougher positions to evaluate.  It’s unique in that there is a lot more to look at than just balls hit in their general direction. If a ground ball is hit anywhere on the infield, it is likely that the first baseman will be attempting to make a play.  Handling difficult throws from infielders is something that can go unnoticed, because when a first baseman can’t catch a throw in the dirt, the error usually goes to the thrower. At BIS, we mark down a defensive misplay if we feel the throw should have been handled at first.

Wil Myers is my pick as the top defensive first baseman in baseball for 2016. The converted outfielder is very athletic and can move around well. He was fourth among first baseman in defensive runs saved with eight. The leader was Anthony Rizzo with 11 DRS. I liked Myers because he was consistently atop the leaderboards with our data at BIS. He led all first baseman with a scout’s defensive rating of 11.3, while Rizzo had just a 0.4 rating. Myers also led all first baseman with at least 250 opportunities in percentage of 2’s and 4’s converted. He made 95.7% of plays that were deemed 2’s on the difficulty scale and 27.8% of plays that were deemed 4’s. Also, not to go unnoticed, he converted 100% of 1’s, which are routine plays.

Dustin Pedroia graded out exceptionally well across the board. This is also a player I got to watch a ton of in 2016, and the eye test confirms all the terrific metrics for Pedroia. He has always been an elite defensive second baseman, but his metrics were down in 2015 and people started talking about a defensive decline for him. He quickly proved he’s still at the top of his game in 2016. He was tied with Ian Kinsler for the lead among all second baseman in Defensive Runs Saved with 12. Pedroia was also second in scout’s defensive rating by a slim margin. He had a 10.5 scout’s rating while D.J. LeMahieu had a 10.6 mark. LeMahieu and Pedroia were also neck and neck when it came to net GFP-DM/E. LeMahieu had 60 GFP’s, 19 DM’s, and six errors, while Pedroia had 60 GFP’s, 20 DM’s, and six errors. Also, of players with at least 350 opportunities, Pedroia had the highest percentage of 2’s converted, the third most 3’s, and the sixth most 4’s. Overall, DRS and our scout’s defensive rating agreed that Pedroia is either the best second baseman in the league, or extremely close to being the best second baseman in the league. The same cannot be said for other second basemen.

To start off, I want to note that of all the shortstops I watched this year, Simmons was the most impressive. The combination of range, unbelievably quick hands, and accuracy and strength of throws makes him the best and most complete shortstop in the game, in my opinion. The numbers back it up. Brandon Crawford and Addison Russell led shortstops with 20 and 19 DRS respectively, but Simmons was right behind them with 18. Simmons also made the second most GFP’s of any shortstop, with Carlos Correa leading the pack. The issue with Correa, even though he made 14 more GFP’s than Simmons, was mistakes. Correa had 34 DM’s and 14 errors while Simmons had just 21 DM’s and 10 errors. Simmons’ net GFP-DM/E was second as well to Jose Iglesias. Also, of players with at least 400 opportunities, he had the highest percentage of 2’s and 4’s, and the fifth highest percentage of 3’s. So, in making a ton of GFP’s and making a lot of “difficult” plays, Simmons’ range is off the charts. As I mentioned before, his throws are always accurate as well. Of shortstops that made at least 200 throws to first base, Simmons had the fifth highest “good throw rate.” None of the players mentioned above (Russell, Crawford, Correa) had a better good throw rate than Simmons. He made just one throwing error and had zero additional bad throw misplays on the season.

Third base was one of few positions where I didn’t have as much trouble coming up with a winner. Obviously, there is an abundance of defensive talent at the position, including Manny Machado, Josh Donaldson, Adrian Beltre, Anthony Rendon, and so on. However, there is one player that stands above the rest, and that is Nolan Arenado. He had the most DRS of any third baseman with 20. Kyle Seager and Adrian Beltre tied for second with 15. Incredibly, he also had the most GFP’s by far, with 75. The next closest was Donaldson with 51 GFP’s at third. Arenado made some mistakes, but he still had the highest net GFP-DM/E as well by a pretty good margin. He had the highest scout’s rating at 21.2, with Anthony Rendon coming in second at 16.7. Arenado also had the highest percentage of 4’s converted, at 24.8%. Also, according to Fangraphs, Arenado made the most out of zone plays with 95. The next closest was Seager with 69. Arenado had about an average good throw rate, but he made 307 throws to first, which was over 20 more than the next most, indicating he got to a lot more balls than other third baseman. Once again, anyone who watches Arenado can see how impressive he is at third.

Right field was a tough position with three players that could make a case for the Fielding Bible Award. However, between Mookie Betts, Adam Eaton, and Jason Heyward, Betts comes out on top. First of all, he not only led right fielders with 32 DRS, but he led all of baseball with that total. Betts was also tied with Eaton for the highest Net-GFP/DM total with 11. He was second with 27 GFP’s and made just 16 mistakes with 15 DM’s and one error. The former minor league second baseman showed off a tremendous arm as well, with nine kills and four runs saved from throwing, which were both second in the MLB. He was also fourth in scout’s rating at 6.0.  Betts also had 403 opportunities, which led right fielders. This could be due to his 158 games played, but Fenway Park’s difficult, quirky, and spacious right field may have been a factor in all those opportunities as well. People often say the Red Sox need a good center fielder to play right field because of all the ground to cover. We saw it with Shane Victorino in 2013, when he played an outstanding right field for Boston after spending a majority of his career in center. Betts started 130 games in center for Boston in 2015, and had 10 DRS. His athleticism, speed, and arm have allowed him to make a tremendous transition to right field.

Center field was the toughest position to make a decision on, in my opinion. Between guys like Kevin Pillar, Kevin Kiermaier, and Billy Hamilton, you could almost close your eyes and point to one to make the choice.  I closed my eyes and picked Billy Hamilton. Okay, that’s not true, but I still picked Billy Hamilton. That may be a bit surprising since he finished third in DRS among the three guys I mentioned above. Having said that, Hamilton still posted a very impressive 15 Defensive Runs Saved. I trust the numbers and the scout’s we have at BIS, and those numbers along with what I saw from Hamilton this summer is what set him apart for me. Hamilton was tied with Pillar for the lead in scout’s defensive rating at 12.7. They were well ahead of Kiermaier, who had a 3.2 rating. Hamilton also had the most GFP’s and the highest Net-GFP/DME among center fielders. He had 34 good fielding plays and a net of 16. He also did some damage with his arm, with six kills and four runs saved from throwing. What impressed me the most was his conversion rate of 33.3% on plays deemed difficult plays. That’s incredible, but when you watch Hamilton play and see the speed he has, it’s very believable.

For me, this was the easiest position to pick a winner. It’s Buster Posey. He had 23 DRS, with the next closest being Derek Norris at 15. Posey is elite as an all-around defensive catcher, from framing, to blocking, to throwing. Posey led catchers who had at least 300 attempts at blocking a ball with a .952 Catcher Block Rate. He had just two passed balls and only 19 wild pitch misplays. He also grabbed a very impressive 89 extra strikes for his pitchers while throwing out 33% of would-be base stealers. Specifically, his throws to second base are what impressed me the most. The accuracy is incredible, as almost every single one of his throws are either on the bag or to the right of the bag, which is important because the player on the receiving end does not have to reach and waste time for the tag. On these throws to second, Posey threw out 21 of 48 runners.

Jarrod Dyson was my pick here, with Javier Baez a close second. Dyson had the most DRS among players who qualified for multiple positions with 19. What was incredible to me about Dyson, however, was that Dyson saved at least five runs in all three outfield positions. Being able to play all three outfield spots at an elite level is pretty incredible. He also recorded eight kills with his arm, including five from right field, where the arm is relied on more heavily.

Yes, I had the 43-year old Bartolo Colon as my winner for best defensive pitcher. Colon led pitchers with eight Defensive Runs Saved. He fielded his position exceptionally well, and did a great job of holding runners on first base. Just 15 runners attempted to steal off Colon, which is wise considering his average time to the plate of 1.30 seconds. Of those 15, four were caught stealing, three were picked off and then caught stealing, and two more were simply picked off by Colon. He controlled the running game about as well as you can. As far as fielding balls back at him, Colon had the second best scout’s rating. He converted 50-50 plays at a much higher rate than 50%, converting on 8 of 9 plays that were deemed a three on the difficulty scale. 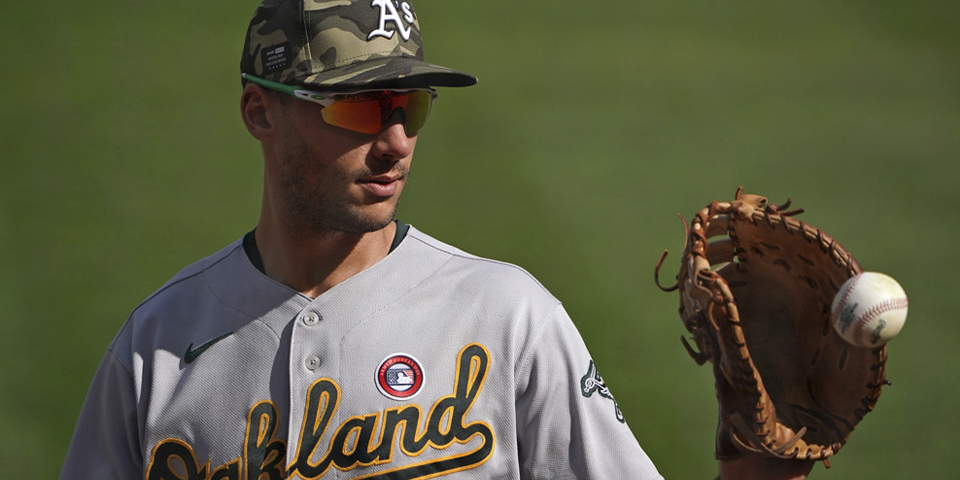 The A’s have struggled defensively